More than 1,000 lots of generously illustrated, premium-quality sports memorabilia items, including important game-used apparel, sports cards and autographed material, are now available to view and bid on at Grey Flannel Auctions’ website. All major sports are represented, with an emphasis on provenance, authenticity and rarity throughout. Bidding will close on June 5, 2022.

Wayne Gretzky’s last Edmonton Oilers jersey — worn when he won his final Stanley Cup — has the potential to be the most valuable hockey jersey of all-time.  The jersey is a highlight of Grey Flannel Auctions summer auction, which starts on May 16. Other auction highlights include Willis Reed’s New York Knicks 1970 NBA Finals warm-up jacket, Chicago “Black Sox” Eddie Cicotte’s 1917 World Series jersey, Barry Bonds’ first career home run baseball and a highly graded baseball signed by both Babe Ruth and Lou Gehrig. Interested bidders may participate in the auction online.

Wayne Gretzky, known as the “Great One,” revolutionized hockey and is the greatest player to ever skate on the ice. Commenting on the jersey, Grey Flannel Auctions owner Michael Russek said, “Gretzky’s game-worn jersey marked the peak of his career as he captured his fourth and final Stanley Cup. However, it was also the end of an era, as Gretzky would never wear an Oilers jersey again. There is a lot of demand from collectors to own memorabilia from the career of the greatest hockey player of all-time. Gretzky’s jersey has the potential to be the most valuable hockey jersey ever.”

1988 Wayne Gretzky Jersey
Wayne Gretzky wore the jersey being auctioned when hoisting the Stanley Cup after sweeping the Boston Bruins in four games in what would ultimately be Gretzky’s final game as an Edmonton Oiler. During Game 4 at the Boston Garden, with 3:23 remaining in the second period, moments after the Oilers tied the score at 3-3, the electricity went out. After much deliberation from Edmonton, Boston and NHL officials, it was decided the game would not be finished that night. The contest was replayed from the start in Edmonton two days later. The Oilers defeated the Bruins 6-3 to complete the sweep and win their fourth Stanley Cup in five seasons. Gretzky won the Conn Smythe Trophy for Most Valuable Player during the Stanley Cup Playoffs with 12 goals and 31 assists for 43 points. Just 12 weeks later, the Oilers traded Gretzky to the Los Angeles Kings.

The jersey, which is being offered publicly for the first time, is covered in champagne stains from the Championship celebration, stick and puck marks, loose threads and multiple repairs to the sleeves. Bidding begins at $250,000.

Willis Reed Warmup Jacket
The New York Knicks were expected to be without their superstar MVP Willis Reed in game 7 of the 1970 NBA Finals against the Los Angeles Lakers. Reed had torn a muscle in his right thigh in game 5 and missed game 6. In one of the most memorable moments in NBA History, Reed unexpectedly hobbled onto the floor against the Lakers in Game 7 of the NBA Finals.  The crowd at Madison Square Garden erupted in unison and it is regarded as perhaps the greatest moment in MSG history. Reed hit two jump shots in the opening minutes to boost his teammates’ confidence and helped the Knicks capture their first NBA championship.

Reed’s warm-up jacket from the incredible Game 7 of the NBA Finals — also known as the “Willis Reed Game” – is being auctioned. The jacket was worn prior to the game, when Reed was on the bench and is photo-matched to his post-game interview with ABC sportscaster Howard Cosell. Bidding begins at $10,000.

Eddie Cicotte Jersey
Eddie Cicotte was one of the most dominant pitchers of his era. He would have been considered among the game’s greatest of all-time, had he not agreed to throw the 1919 World Series, which resulted in Cicotte being banned from Major League Baseball for life. In 1917, the year of the jersey being auctioned, Cicotte led the league with 28 victories and a 1.53 ERA. Cicotte’s dominance continued into the 1917 World Series, where he helped the White Sox defeat the New York Giants. Two seasons later, Cicotte continued his dominance yet became concerned with his family’s future financial security. A clause in Cicotte’s 1919 contract granted him a $10,000 bonus if he was able to win 30 or more games for the season. Cicotte had already won 29 games, with several weeks remaining in the regular season, but was promptly benched to supposedly afford him the proper rest needed to excel in the upcoming World Series, leaving him unable to win the bonus. Having recently purchased a farm for his family, Cicotte had counted on the bonus to help pay off the mortgage. Cicotte subsequently agreed to participate in the World Series “fix” and betray the game of baseball for the betterment of his family.

Cicotte’s 1917 flannel jersey was consigned by his family. The left sleeve features an incredibly rare American flag patch to honor the military during the First World War. Bidding starts at $25,000.

Barry Bonds First MLB Home Run Ball
Home Run king Barry Bonds hit the first of his 762 career homers on June 4th, 1986 against the Atlanta Braves at Fulton County Stadium. A Pittsburgh Pirates rookie, Bonds took Braves pitcher Craig McMurtry deep to left field in the 5th inning in what began one of the most talked about careers in baseball history. Bonds made his Major League Baseball debut just days earlier on May 30, 1986, against the Los Angeles Dodgers. Bonds gifted the baseball being auctioned to his financial advisor in the 1980s after the advisor helped execute Bonds’ premarital agreement. The ball is accompanied by a letter of provenance from the advisor’s family. Bidding on the ball begins at $25,000.

Babe Ruth and Lou Gehrig Signed Baseball
Babe Ruth and Lou Gehrig formed one the greatest New York Yankees duos, as part of a lineup so powerful it was deemed “Murderer’s Row.” The magnificent baseball being auctioned has been dual-signed by the two iconic baseball legends. Babe Ruth signed on the sweet spot and Lou Gehrig signed on a side panel. PSA/DNA has graded the signatures a 7 and the baseball a 7 with an overall grade of 7.5 due to the ball’s beautiful eye appeal. The ball is one of the finest Ruth and Gehrig baseballs in existence. Bidding on the ball starts at $10,000.

The 58th edition of the fully illustrated catalog detailing all lots is now available to view online at www.greyflannelauctions.com Bidding will close on Sunday, June 5, 2022. For additional information on any item in the auction or to make an appointment to inspect auction goods in person at Grey Flannel’s Scottsdale showroom, please call 631-288-7800 or email info@greyflannelauctions.com

Family-owned Grey Flannel Auctions (GFA) has been the Standard Of The Industry for more than 30 years. Headquartered in Scottsdale, Arizona, GFA specializes in vintage game-used jerseys and high-end autographs. The 54th edition of the company’s award-winning fully illustrated catalog is now available for viewing and online bidding through June 5, 2022 at GreyFlannelAuctions.com. For questions about any item in the auction, please call 631-288-7800 or email info@greyflannelauctions.com. 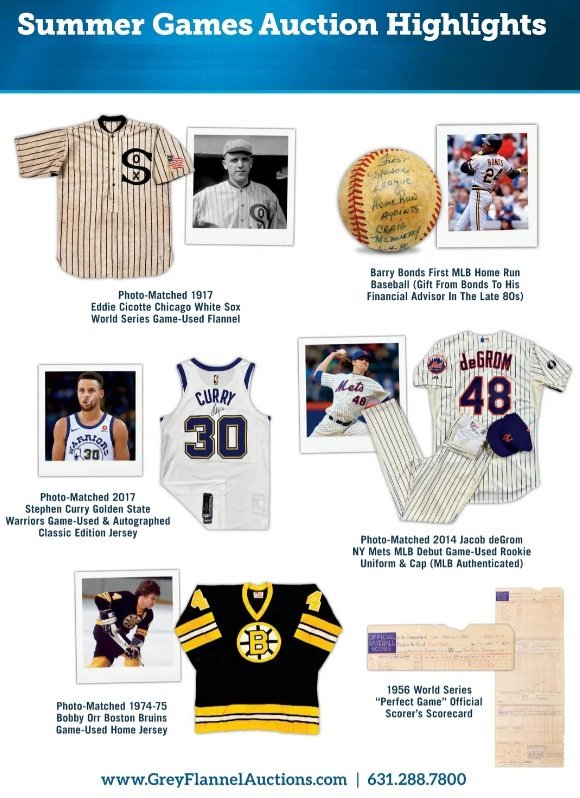