So far this year in the world of pop culture, only Avengers: Infinity War has been able to rival the excitement level generated by Hake’s record-setting March auction. Led by a fresh-to-market issue of Detective Comics #27 that sold for a staggering $569,000, the sale took in $2.35 million and emphatically validated the demand for Golden and Silver Age comics and original comic art. Once again it’s time for collectors to fasten their seat belts, as Hake’s rolls out a blockbuster July 10-12 online-auction event brimming with rare memorabilia from hundreds of popular categories.

The insatiable demand for original comic art and the prices such works are realizing at auction indicate the gap is closing between comic and mainstream fine art. An excellent case study may be in the making with the original art for two Frank Frazetta covers entered in Hake’s July auction. Frazetta, who died in 2010, was best known for his fantasy and horror art, but his gift was not confined to those genres. The two auction lots represent the color covers for issues #2 and #4 of Blazing Combat, a comic/magazine published from October 1965 to July 1966. The publication featured war stories in both contemporary and period settings, but its run was short, lasting only four issues. Each of the Frazetta cover artworks from this obscure publication is offered with a $75,000-$100,000 estimate. “If someone were to acquire both of the artworks, they would own fifty percent of the title’s run,” said Alex Winter, president of Hake’s Americana. “That’s very desirable and almost unheard of in comic-art collecting.” 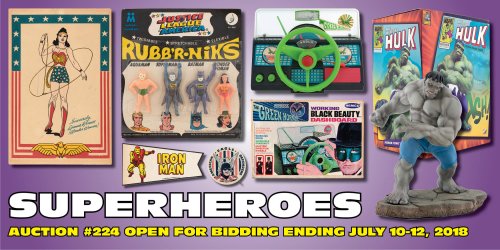 The Ron Lim original pen-and-ink art for page 9 of Silver Surfer, Vol. 3 #36, published by Marvel in April 1990, delivers a double dip of mutant superhuman and Titanian Eternal, Thanos. One panel of the 11 1/8 by 17-inch storyboard shows Thanos with his Star Gem, while another depicts a raging battle scene with Thanos going toe to toe with Thor in the center of the action. This significant page, which offered a portent of things to come in The Avengers’ universe, is estimated at $5,000-$10,000.

Another important artwork is Alex Ross’s original color page created in 1994 for Marvels, a four-issue comic series that examines the Marvel universe, its superheroes and supervillains from the perspective of an “everyman” character. The gouache-over-pencil art from issue #4, page 41 consists of six panels with images of various Marvel characters. Estimate: $10,000-$20,000. Also at the top of the art category is Greg Hildebrandt 2017 acrylic-on-canvas painting of Wonder Woman in Golden Age attire. Created as a tribute to Wonder Woman’s 75th anniversary, it could hit $10,000-$20,000. 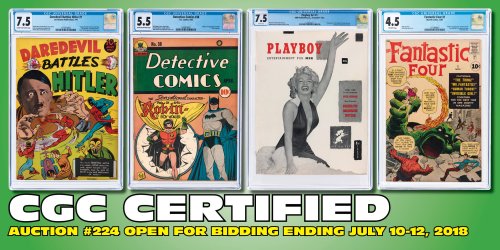 An outstanding lineup of 1,300 comic books from the Golden through Modern Age will be auctioned, and of those, 450 are CGC certified. Many are first issues or represent the first appearance of a key character, as is the case with Detective Comics #38, which introduces Batman’s sidekick Robin the Boy Wonder. Published by DC in April 1940, this comic – which is CGC-graded 5.5 Fine – explains Robin’s origin and features the likable new character in boldly colorful cover art by Bob Kane and Jerry Robinson. “This comic, which is completely fresh to the market, is part of a recently discovered Golden Age comic book collection whose original owner purchased the comics new off the rack in the 1930s and ’40s,” said Winter. Compared to the aforementioned Detective Comics #27 that Hakes sold for well over half a million dollars, there are only around a dozen more known copies of Detective Comics #38, per the CGC worldwide census. “It could far surpass its auction estimate of $50,000-$75,000,” Winter added.

Hake’s also will be offering another helping of impossibly rare action figures from the peerless Russell Branton Star Wars collection. Highlights include: a 1977 Kenner Star Wars Darth Vader action figure, AFA-graded 95 Mint and encapsulated on 12 Back-A blister card, $20,000-$35,000; an AFA-graded 80 Near-Mint Luke Skywalker in 12 Back-C blister card with original Double-Telescoping Lightsaber, $10,000-$20,000; and an Anakin Skywalker prototype for Kenner’s 1985 Star Wars: The Power Of The Force toyline, marketed after it was offered as a Return Of The Jedi mail-in offer, $20,000-$35,000. In March, Part two of Branton’s collection beat the overall high estimate by 40 percent, inspiring Hake’s to conduct podcasts focusing on the July selection.

In addition to Star Wars, other action figure lines from the Branton collection (also AFA graded) include Battlestar Galactica and Masters of the Universe.  And there are other AFA items from additional consignors such as a rare Palitoy AT-AT AFA 85 and Transformers Series 1 Optimus Prime (Pepsi Variant) AFA 85.  Click here to view all the Branton collection items and here for ALL the AFA items in this auction.

Other premier auction items include a fresh-to-the-hobby original 1913 photo-postcard depicting the multi-racial All-National Baseball Club, $10,000-$20,000; and a boxed Donald Duck Rocket tin-litho friction toy of unknown French manufacturer. One of only two such examples encountered by Hake’s in 51 years, it is estimated at $2,000-$5,000. 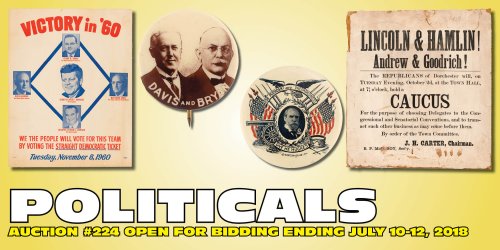 For the political memorabilia connoisseur, Hake’s offers an extraordinary rarity – a 1916 campaign button with American patriotic imagery around a portrait of Republican presidential candidate and Supreme Court Justice Charles Evans Hughes. While Hughes was unsuccessful in his run against the incumbent Woodrow Wilson, the only known example of his ”Give Me Hughes” campaign button is a landslide winner with collectors and commands a $10,000-$20,000 estimate.

Hake’s Americana Auction #224 has opened for bidding by phone, mail or online at hakes.com. The first session will close on July 10, 2018, while the second session will conclude on July 12. July 11 is an interim day in which bidders can peruse the catalog and prepare for further bidding. To request a free printed catalog or for additional information on any item in the sale, call toll-free: 866-404-9800 or 717-434-1600. Email: hakes@hakes.com.