Hake’s Americana wrapped its 50th-anniversary year with a November 14-16 auction that set multiple company and auction-industry records as it crossed the finish line at $1,754,464. All prices quoted are inclusive of 18% buyer’s premium.

“It was a sale for the history books,” said Alex Winter, president of Hake’s Americana. “First and foremost, it was the highest-grossing individual sale of our half-century in business, and it also capped our most successful year ever, in terms of the grand total for all sales conducted within a twelve-month period. There was a very strong bidder turnout, and virtually every category met or exceeded expectations, from antique political items all the way through to original comic art from modern-day artists. Many significant records were set for individual items and categories.”

The centerpiece of the sale, the 100% AFA-graded Russell Branton Star Wars collection, produced one of the event’s top lots: a Kenner Ben (Obi-Wan) Kenobi double-telescoping action figure. Presented on its original blister card, the coveted 1978 figure sold within its estimate range for $76,700. 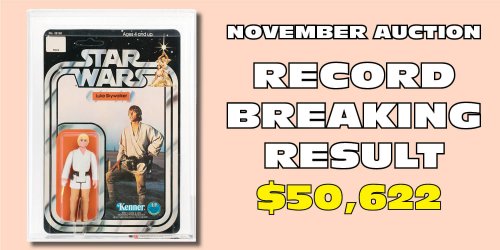 From the same collection, the highest-graded example of a 1978 “Yellow Hair” Star Wars Luke Skywalker figure was hotly pursued to $50,622 against a pre-sale estimate of $10,000-$20,000. Its astonishing price set a new record for any Luke Skywalker figure. Another highlight was the Anakin Skywalker prototype figure from the 1985 toy line for the film Star Wars: The Power of the Force. It garnered 17 bids before settling at $34,981 against an estimate of $10,000-$20,000.

Always one of Hake’s strong suits, political and campaign memorabilia was unstoppable. The category was led by an extraordinary rarity: a 1920 “Americanize America Vote For Cox And Roosevelt” jugate button. One of only four high-grade examples known and possibly the best of any in existence, it landed just shy of its high estimate, at $47,279. 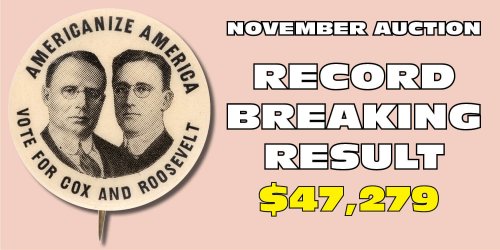 “The Cox-Roosevelt jugate was an outstanding performer. It not only achieved a record auction price for a button of its specific type but also for any sort of button, political or otherwise,” said Winter.

Even in light of the prices indicated so far in this report, there was yet another category whose top seller eclipsed all others: vintage comic books. A CGC-graded 7.5 VF issue of Marvel’s Amazing Fantasy #15 had been entered in the auction with expectations of reaching $100,000 or more. Published in August 1962, the sought-after issue introduces The Amazing Spider-Man (Peter Parker) and is the first to show him on the cover. Sixteen aggressive bids propelled the Silver Age classic to $140,760, a world record auction price for the title in its enviably high grade.

Another ephemera lot deserving special mention was the December 1953 issue of Playboy #1 featuring Marilyn Monroe on the cover and inside as the publication’s first-ever centerfold. CGC-graded 8.5, it sold for $29,205. 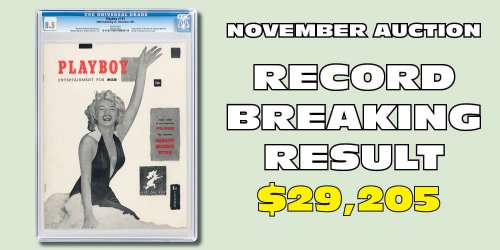 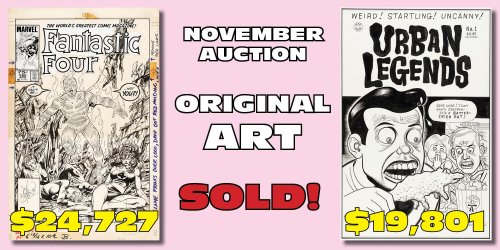 The enduring interest in Negro Leagues baseball memorabilia was evident during the sale, as well. A real-photo postcard of the 1930 Homestead Grays, with a lineup that included four Hall of Famers, drove in $17,523 against an estimate of $10,000-$20,000.

“We could not have been more pleased with the results of our third auction of 2017. The excitement and high prices it generated told us in no uncertain terms that the state of the market for high-quality, impeccably provenanced vintage collectibles is stronger than ever,” said Winter. “We can’t wait to see what the next 50 years will be like for the memorabilia hobby and for our business.”