Hake’s Auction #225 ended this week, to the tune of $1,556,958 in total sales. The auction comprised more than 2,500 lots of historical and pop culture memorabilia from as far back as the 1700s. This caps off another successful year for Hake’s, giving them a total of over $6 million in sales from their three premier auctions of 2018.

A 1935 Bismarck North Dakota semi-pro baseball team photo with Hall of Famers Satchel Paige and Hilton Smith sold for $23,364. The baseball photo took the top spot on Tuesday, more than doubling its high-end estimate of $10,000.

The Baranger Motions animated horse-drawn fire engine window display rolled on to $9,994, nearly twice the high estimate of $5,000. Produced from 1925 to 1959 and rented to jewelry stores, the hand-made displays were created in very limited quantities. 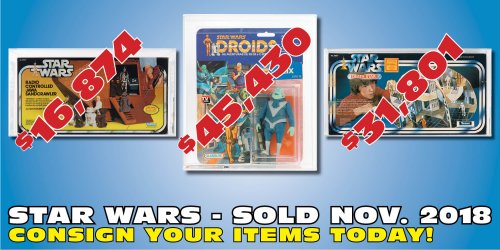 The auction’s top seller was a Ghostbusters 1 and 2 ghost trap film prop which managed to scare up $71,390. The screen-used prop entailed the trap, remote control, and hydraulic foot pedal, which appeared in the 1984 and ’89 films.

‘Once again collectors proved that interest in rare and culturally significant material is healthy and competitive,’ Hake’s President Alex Winter said. ‘The results from this auction has driven our 2018 total to over $6 million. We have the best customers, which could be seen through aggressive bidding across many categories.’

As expected, the Star Wars: Droids Vlix action figure was the highest seller within the Star Wars memorabilia, when it flew to $45,430. Though Kenner made a prototype figure of Vlix, it was never produced and sold, making this Brazilian Glasslite figure among the rarest Star Wars toys.

Another impressive sale from Star Wars was the Death Star Canadian issue special offer cardboard playset that exploded to $31,801, tripling the low estimate of $10,000. The special set from Kenner’s 1978 toy line contains the cardboard Death Star and two Stormtrooper figures. 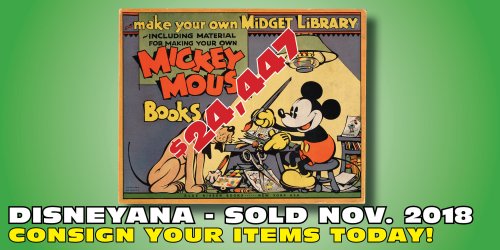 ‘Star Wars toys continue to dominate, in many cases reaching five-figure prices,’ Winter said. ‘With several successful consecutive auctions in the books, I think we’ve shown that Hake’s is the place to consign Star Wars material.’

With Mickey Mouse on the cusp of celebrating his 90th birthday, bidders vied for the beloved Disney character. A Mickey Mouse Books – Make Your Own Midget Library boxed set was propelled to $24,447 – nearly five times its high-end estimate of $5,000.

All prices include an 18% buyer’s premium. Top closing prices, organized by Tuesday and Wednesday/Thursday end times, can be seen on the Hake’s website. Keep an eye on Scoop for additional auction coverage in the next few weeks.