Bid in The Heritage Auctions Historical Manuscripts Grand Format Auction ending on April 18, 2018.  There are 300+ lots of items slated for the auction block. Bid, view and register at historical.ha.com.  A hand-written manuscript by one of the most popular and successful mystery writers of all time will be up for sale in Heritage Auctions’ Manuscripts Auction April 18 in Dallas, Texas.

Sir Arthur Conan Doyle penned The Adventure of the Dancing Men in 1903 for publication in The Strand Magazine. Doyle’s first two novellas featuring Sherlock Holmes were published more than a decade earlier to positive reviews, but it was not until the appearance of his short stories in The Strand Magazine that Doyle’s popularity and fame surged.

The significance of the Dancing Men manuscript (est. $500,000+) cannot be overstated. This is an actual working manuscript that shows Doyle’s complete process in weaving a story. Emendations run throughout, and Doyle is careful to cross out words and make additions in such a way that both the original text and revisions are 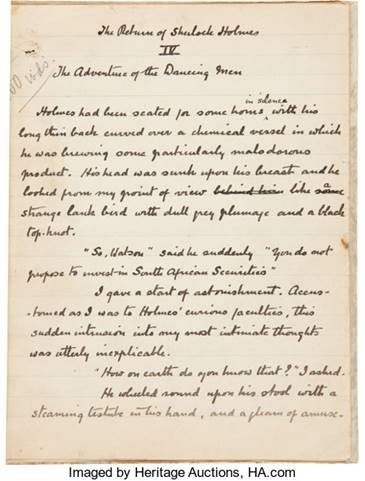 visible.According to Randall Stock, a member of The Baker Street Irregulars, Doyle got the idea for the dancing men cipher in May 1903. Stock says, “While staying at the Hill House Hotel in Norfolk (England), Doyle signed a young woman’s autograph book. The book also contained drawings on another page by two children: Gilbert John Cubitt and Edith Alice Cubitt had signed it using decorated letters and a stick-figure sketch involving music.” Combining elements used by the children and influenced by Edgar Allan Poe’s The Gold Bug, Doyle crafted the dancing men cipher. He used the children’s surname, “Cubitt,” for the client in the story.

Provenance of the manuscript can be traced back to Doyle, when he donated the bound manuscript to an auction for the benefit of the Red Cross in 1918. The current owner and consignor was gifted the manuscript by her father, a noted book dealer in Texas.

Like most Sherlock Holmes stories, The Adventure of the Dancing Men is told from the perspective of Watson, who tells the tale through first-person narration. The plot centers around a series of messages containing the stick figures that arrive at the home of Hilton Cubitt and his American wife, Elsie Patrick. While Holmes endeavors to decipher the code and determine the source of the notes, both Cubitt and Patrick are shot — Cubitt fatally (making this one of just two stories in which a client dies after seeking Holmes’ help). Holmes is able to identify Patrick’s former fiancé as the killer by sending back notes using the stick figures.

“The Dancing Men manuscript was last offered at auction more than 90 years ago,” says Sandra Palomino, director of historical manuscripts at Heritage Auctions. “We had the privilege of appraising the manuscript back in 2012,” Palomino says, “and we are thrilled to be selected to bring it to auction. Although other Doyle manuscripts have appeared in recent years, The Adventure of the Dancing Men is a highpoint in the Doyle canon.”

The manuscript will be on display at Heritage Auctions’ New York offices located at 445 Park Avenue from April 9 through April 12.

Other top lots in the auction include, but are not limited to: 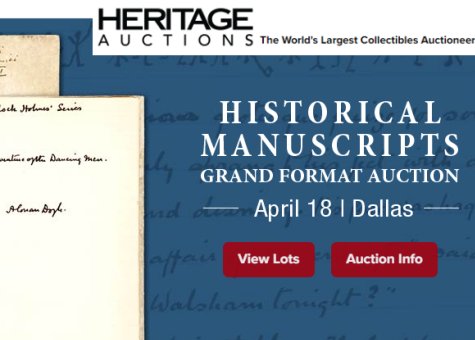