This is your opportunity to own a Super Bowl ring owned by one of the greatest coaches, innovators, motivators, and men in professional football history- Hank Stram.  The Worthridge Auction will run November 19 until December 6.

Close your eyes and you can see the nattily attired Stram patrolling the sidelines, in his navy blue blazer with a red pocket square and Chiefs spearhead logo on the breast pocket, exuberantly leading his 1969 Kansas City team to victory in Super Bowl IV. Thanks to NFL films, we remember Stram enthusiastically telling his Hall of Fame quarterback Len Dawson to run “65 toss power trap” and encouraging his Chiefs to “keep matriculating the ball down the field.” 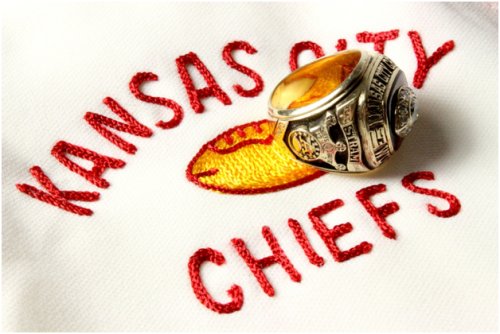 Stram and Chiefs general manager Jack Steadman commissioned Josten’s to design a ring that symbolized the victory over the Vikings and acknowledged the team’s tenth anniversary. Josten’s presented this ring to Stram for his approval.

The ring, which weighs 26 pennyweight, is 10k gold, featuring a natural one karat diamond surrounded by 10 smaller diamonds (one for each year the franchise spent in the AFL), ranging in size from three to five points, set in a white gold football shaped crest. The crest is set into a glowing synthetic ruby. On one shank is the American Football League seal surrounded by a crown. The three points of the crown list the Chiefs AFL championships- 1962 (as the Dallas Texans) 1966, and 1969. In between the AFL logo and championships is the score of the final title game in AFL history, Chiefs 17, Oakland Raiders 7.

Also in this collection is a Kansas City Chiefs track suit made for and worn by Stram.

Both items include a letter of authenticity from the Stram estate.

Worthridge is proud to present the Reggie White Collection, and all items will be a part of their second Sports Memorabilia Auction, running from November 19 until December 6.

If you’d like more information about this, or to schedule an interview, please email Will Sykes at will@worthridge.com, or contact our office during normal business hours, Monday – Friday 8:00 am – 5:00 pm eastern time.