A collection of rare personal memorabilia from Pittsburgh Pirates hurler Harvey Haddix, including items from his 12-inning near-perfect game and 1960 World Series title are up for bids in the 2015 Goldin Auctions Summer Auction. Four of the items will be sold at the Premium Live Auction on July 31, during theNational Sports Collector’s Convention in Chicago, while two lots will be up for bid from July 8th through August 8th, online at GoldinAuctions.com.

Haddix, a three-time All-Star and three-time Gold Glove Award winner who won 136 games over 14 seasons, had one of the greatest pitching performances ever when he threw 12 perfect innings against the Milwaukee Braves on May 26, 1959. The southpaw retired 36 consecutive batters using only his fastball and slider against a usually potent Braves lineup. An error by third baseman Don Hoak lost the perfect game, but Haddix finished with 12.2 innings pitched, allowing no earned runs and eight strikeouts.

“This is the greatest pitching accomplishment in the history baseball and to have items up for auction from that game is a rare opportunity,” said Ken Goldin, Founder of Goldin Auctions. “We are honored to share these items with collectors and remind fans of this remarkable accomplishment and his outstanding career.”

To register for the auction and receive a free catalog, visit GoldinAuctions.com. 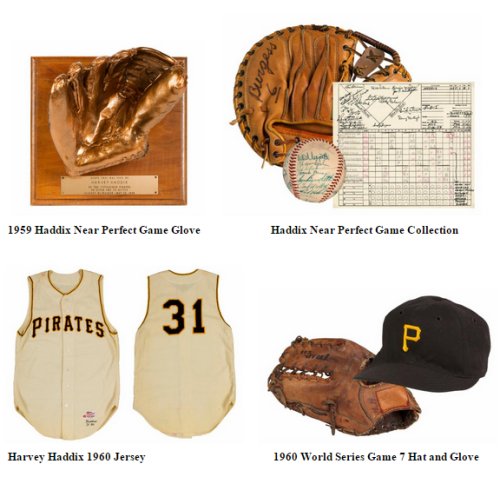 The four items from The Harvey Haddix Collection available at the Live Auction include:

(Lot #74) – Harvey Haddix’s 1959 Game-Used Glove from his 12-Inning near-perfect game. Realizing what he had accomplished, the lefty had the glove bronzed to commemorate what is still a game for the ages.

(Lot #75) – 12-Inning Near-Perfect Game Memorabilia including the catcher’s mitt used by Smokey Burgess, Lineup Cards from the game and a game-used baseball signed after the game by the 1959 Braves to document their place in baseball history.

(Lot #76) – Harvey Haddix’s 1960 Uniform Worn as winning pitcher in Game 7 of the World Series versus the NY Yankees. Although he gave up the game-tying run as a reliever in the eighth inning, a Bill Mazeroski home run in the ninth cemented him as the winning pitcher. The home uniform features light game use with the classic black and gold “PIRATES” arching across the chest and Haddix’s No. 31 on the back.

(Lot #77) – Haddix’s 1960 Game-Worn Pirates Cap and Glove from Game 7 of the World Series. The near mint condition cap and glove feature game use. The initials “H.H.” can be found on the glove’s wrist strap.

The Premium Live Auction will be held on July 31, at the Muvico 18 Theater in Rosemont, IL, located just a mile from the Donald E. Stephens Convention Center, the site of the National Sports Collector’s Convention. 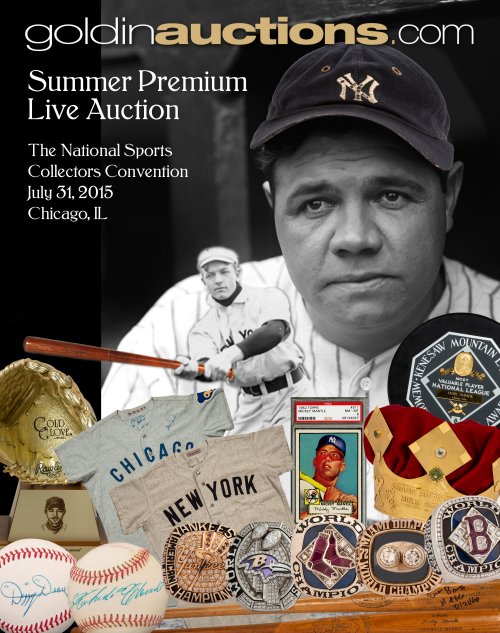