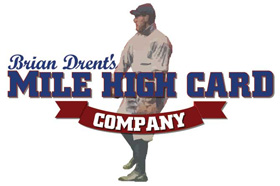 Mile High Card Company’s March Auction opened to a record bidding and action has remained steadily heavy throughout, with the conclusion of the auction approaching fast on Thursday, March 21st. “We’ve already seeing some incredible prices being realized, along with a few record-breakers, and we’ve still got a few days to go,” said MHCC CEO and President Briant Drent. “With so many high-profile items being offered, we’re expecting some stiff competition well into Thursday night.”

As expected, the selection of game-used bats, including one from each member of the 500 home run club, has seen spirited action with current highs including present bids for a 1939-40 Ted Williams Rookie-Era Game-Used Louisville Slugger Bat PSA/DNA GU 9 at $31,194, 2001 Barry Bonds Game-Used and Signed Sam Bat (73 Home Run Season) PSA/DNA GU 10 going strong at $11,858, 1982 Cal Ripken Jr. Rookie-Era Game-Used Louisville Slugger Bat GU 10 at $8,354, 2013 Mike Trout Signed Game-Used Old Hickory Bat PSA/DNA GU 10 at $7,594 and 1959-60 Eddie Mathews Signed Game-Used Adirondack Bat PSA/DNA GU 10 at $6,912. High-grade 1966 Topps baseball set-builders will be pleased to know that the 1966 Topps Baseball Near-Complete Master Set (587/612) #8 on PSA Set Registry appears as though it will be broken up as the sum of the singles presently stands well above the bid for the entire set, presently at an aggregate total of $51,158 with several cards still without an opening bid.

While the conclusion of the auction is fast approaching, there’s still time to get registered and be part of the action. Auction registration can be done online at www.milehighcardco.com or by calling the Mile High Card Company office at (303) 840-2784. MHCC is also accepting consignments for the next catalog auction, so if you desire the maximum return for your collection, please contact our office.