Tim Brown’s Heisman Trophy, LeBron James’ Hummer and Lee Harvey Oswald’s handcuffs are just three of the nearly 1,000 lots of sports, entertainment and pop-culture memorabilia being offered in the Goldin Auctions 2018 Winter Auction from Nov. 19 through Dec. 8 at GoldinAuctions.com.

In addition to these one-of-a-kind items, the auction is loaded with vintage trading cards, game-worn memorabilia, championship rings, trophies, awards, artwork and much more from the likes of Mickey Mantle, Benjamin Franklin, Mick Jagger and even Shohei Ohtani. The complete auction catalog is available online at GoldinAuctions.com. Here are some of the marquee items.

Lot #1 – 1910 E98 “Set of 30” Near Set (25/30) #1 on the SGC Set Registry-The best SGC-graded “near set” of the ultra-desirable E98 “Set of 30” baseball cards-issued in 1910 and known to hobbyists as part of the famous 2012 “Black Swamp Find” in Defiance, Ohio, being offered at auction for the first time ever. The offered gallery includes the 25-card near set graded by SGC, plus nine additional, variation cards. The fabulous, showcased roster is missing only Jennings, Mathewson, Lajoie, Tinker and Walsh for completion. Highlights of this assembly include: SGC GEM 10: 4 cards w/Evers, Kling, Meyers and Vaughan; SGC MINT+ 9.5: 7 cards w/Bender, Clarke, Collins, Wagner/Green, Wagner/Red, Young/Green and Young/Red; SGC MINT 9: 10 cards w/Bresnahan, Bridwell, Brown, Chance, Cobb, Coombs, Dooin, Ford, McGraw and Tenney.

Lot #2 – 1987 Heisman Trophy Presented to Tim Brown-The original trophy presented to Brown in 1987 and the first-ever awarded to a wide receiver. Brown is one of just nine Heisman Trophy winners enshrined in Canton and, from that group, only O.J. Simpson’s original trophy has been sold at auction.
Lot #4 – LeBron James’ Infamous 2003 H2 Hummer-This 2003 H2 Hummer LeBron received as a birthday present from his mother Gloria when he turned 18 made headlines and made LeBron James a household name. The controversial vehicle was eventually deemed a legal gift by the Ohio High School Athletic Association. The vehicle has 28,532 miles and is still in full working order. Featured on the TV show “Unique Whips,” which aired on the Speed Channel from 2005 to 2008, tt was painted white from its original pewter color, but it still has the bells and whistles, including 28-inch rims, multiple TV screens, a JBL sound system, a PlayStation, DirecTV TracVision and a custom chrome grille. It has been on display at the Greater Cleveland Auto Auction since it was purchased in January 2014. GCAA has complete and detailed documents from the state of Ohio regarding ownership of this vehicle.

Lot #48 – Lee Harvey Oswald Handcuffs Used to Arrest Oswald after JFK Assassination-The Smith & Wesson cuffs were originally issued to Officer Ray Hawkins when he joined the Dallas Police Department in 1953. Bearing the serial number “38468,” Hawkins used these rare and iconic cuffs throughout his career and retained them after he left the force. They are accompanied by a signed and notarized affidavit from Ray Hawkins describing his actions on November 22, 1963, and the role these handcuffs played in the capture of Lee Harvey Oswald. It is also noteworthy to mention that this is one of the very few significant JFK-Oswald items that is not in the National Archives. The Dallas Police Department required its officers and detectives to buy their own handcuffs, thus allowing Hawkins to retain his private property after the assassination.

Lot #3 – 2002 Aston Martin Vanquish Signature Car – 50th Anniversary of the Basketball Hall of Fame-The two-door luxury coupe features a 460 HP, 5.9-liter V12 engine with a 6-speed overdrive enabled transmission. This is not just any old Vanquish that rolled off the assembly line, but it’s the Official 50th Anniversary Hall of Fame car, a one-of-one car featuring the signatures of over 50 basketball Hall of Famers. The vehicle is custom wrapped, with a basketball and ESPN insignia on each side, and the Children’s Safety Network logo and “50th Anniversary Hall of Fame” on the hood. The car was originally obtained directly from the Children’s Safety Network in 2012 as a charitable purchase.

Lot #55 – The Beatles & Mick Jagger Signed Notebook – An album page that could very well be considered the Holy Grail of popular music history. This page has been signed by all four Beatles – John Lennon, Paul McCartney, George Harrison, and Ringo Starr – and Rolling Stones front-man Mick Jagger. McCartney, Lennon, Harrison, and Starr have all signed the paper in black ballpoint pen. Ringo sketched a small drawing of a star below his signature. Jagger has signed the upper portion of this album page, using a blue pen to write his iconic signature. This incredibly rare grouping of signatures is a museum quality piece and would instantly become the star attraction of any serious collection. The album page has been encapsulated and authenticated by PSA/DNA
Lot #5 – Lou Gehrig Signed Official A.L. Baseball-Gehrig’s signature is in very strong black fountain pen and transcends any of the overall toning of the leather. With the bold signature that leaps off the leather, this Lou Gehrig single-signed ball displays very well. The ball comes with a LOAs from JSA and two LOAs from PSA/DNA for the signature. PSA/DNA has graded Gehrig’s signature a solid 6.

Lot #74 – Tupac Shakur Handwritten Composition Notebook-The Mead composition book has been written in extensively by Tupac on a total of 46 pages. This is the only known full Tupac Shakur notebook in existence, as all other examples are fragments of the larger whole in the form of individual pages or front and back covers. The front cover has “Written by Tupac Shakur” written on it in black pen. It is packed full of incredible sets of working lyrics, including drafts of “How Do U Want It” and “Shorty Wanna Be A Thug,” both of which appeared on the album many consider to be Tupac’s masterpiece, All Eyez on Me. “How Do U Want It” became one of Tupac’s most popular singles, charting at No. 1 on the US Billboard Top 100 and going double Platinum.

Lot #32 – 2018 Shohei Ohtani Game-Worn LA Angels 1980s TBTC Home Run Uniform 8/27-28 /18-This is the first known full uniform ever offered up of the Japanese phenom. Ohtani, a sensation as both a hitter and a pitcher, started the game on the 27th as the designated hitter for the Angels. In the fourth inning he hit a fastball from Rockies starter Jon Gray over the left-center fence for a three-run homer, his 15th of the season. Ohtani finished this game, a 10-7 Angels win, 2 for 5 with three RBI and two runs scored. On the 28th, Ohtani wore the pants offered in this lot during the Angels 3-2 loss to the Rockies. The Japanese star appeared in this game as a pinch-hitter in the ninth inning.

Lots #25-26 – 1992 & 1993 Dallas Cowboys Super Bowl XXVII and XXVIII Player Ring Dixon Edwards-Two separate lots, each featuring the ring from the former Cowboys linebacker. Both come in the original presentation box and a LOA from Dixon Edwards.

Lots #57-62 – The Alex English Collection-Six lots of memorabilia from the personal collection of the NBA great including: his Hall of Fame Ring; basketball used to score career point #20,000; a 1989-90 game-worn Denver Nuggets jersey and shorts; a game-worn Dreher High School jersey and more.

Lots #226-264 – The Dick Enberg Collection – 39 lots of awards, mementos and memorabilia from the legendary broadcaster including autographed items from Ted Williams, Steffi Graf, Muhammad Ali, John Elway, Gordie Howe and more.
Lot #11 – 2012 Derek Jeter Game-Used, Signed & Inscribed P72 Bat from ALDS Games 1-4-Jeter used this Louisville Slugger P72 during Games 1 through 4 of the ALDS vs Baltimore. Jeter collected six playoff hits using this bat, including a triple prior to it being cracked in the bottom of the third inning of Game 4. Jeter has signed this bat in bold silver marker, inscribing “The Captain” below his name. This gamer comes with impeccable provenance and authentication as a LOA from “The Captain” accompanies this bat.

Lot #13 – 2016 Aaron Rodgers Game-Used & Photo-Matched Packers Road Jersey (11/13 and 11/20)-Green Bay Packers quarterback Aaron Rodgers wore this road Packers jersey for at least two games during the 2016 season. This jersey has been photo-matched to the November 13, 2016, game at Tennessee where Rodgers threw for 371 yards and two touchdowns in the Titans 47-25 win, and also to the November 20, 2016 game against the Washington Redskins, where he threw for three touchdowns and 351 yards. Despite Rodgers’ brilliance, complete with a 115.00 QBR, the Redskins scored two late touchdowns to pull away from the Packers, winning 42-24. 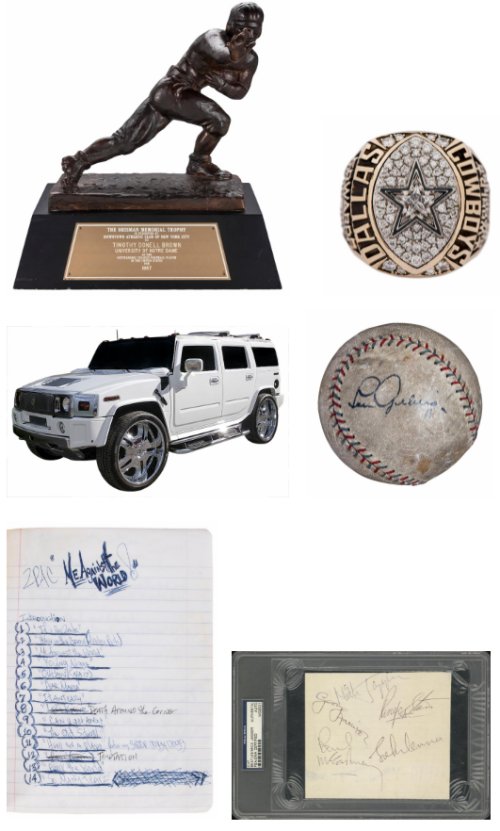