A high-grade 1952 Topps Mickey Mantle rookie baseball card sold in an online auction on Dec. 10, 2015, for $525,800, the highest price yet paid for a Mantle rookie. “The 1952 Topps Mantle rookie is a truly transcendent piece of Americana,” said Chris Ivy, Director of Sports Auctions at Heritage, the company selling the card.

“It looms in the collective American imagination like a copy of Action Comics #1, an inverted Jenny stamp or an Abe Lincoln autograph. You don’t have to collect baseball cards to recognize it, so thoroughly is it woven into the national consciousness.” 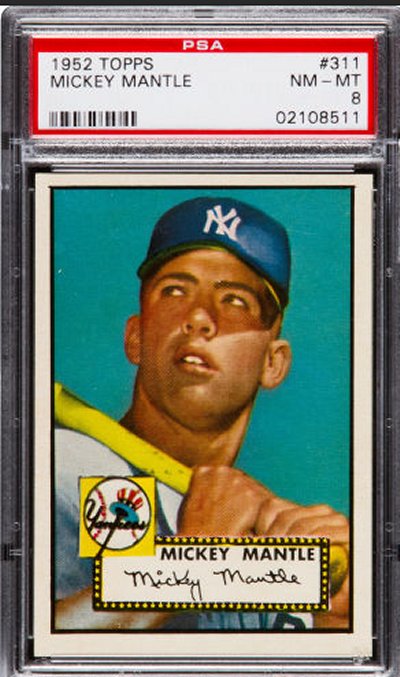 The 1952 Topps Mantle rookie card has long been recognized as the most important and recognizable gum card of the post-war era and it is unquestionably the most valuable. Prices on the very rare 8.0 graded examples have skyrocketed in the last 12 months, with other examples selling — in respective order — for $386,000, $406,000 and $486,000.

“The sky seems to be the limit for high-grade Mantle rookies right now,” said Ivy. “It’s the one card that all collectors want, and the top collectors want to the top examples. They’re obviously very willing right now to pay what it takes to get them.”

At 407 cards in scope, the 1952 Topps set was the largest of its day, both in number of cards and the dimensions of each one respectively. Ultimately, though, these excesses turned against Topps Company management, who realized late in the 1952 season that the “High Number” cards (#’s 311-407) would never reach their channels of distribution in time for the close of the baseball season. Limited quantities were trucked to stores in the northeastern United States and in Canada, but the solution for a warehouse filled with unsellable cards is said to have been a boat trip several miles out into the Atlantic Ocean and an ignominious burial at sea, making those that have survived — especially Mantle — extremely coveted.