Thanks to two stellar signature animation art auctions and another exceptional event at Knott’s Berry Farm amusement park in Buena Park, California, Heritage Auctions’ Animation Art Department had its best year ever, with total sales for the year of $3,919,080 – breaking the department’s previous record by 38 percent.

“It was an exciting year for Animation Art at Heritage Auctions,” Heritage Animation Art Director Jim Lentz said. “The year began with the historic ‘75 Years of America’s First Theme Park – Knott’s Berry Farm Auction’ held right at the historic park, which drew a record turnout. That was followed by two Animation Art Signature sales, the ‘Art of Fantasia’ auction in July and the ‘Animation Birthday Celebration’ auction, each of which set new records, thanks to artwork from the hands of such artists as Mary Blair, Eyvind Earle, Chuck Jones and Tim Burton, to name a few.” 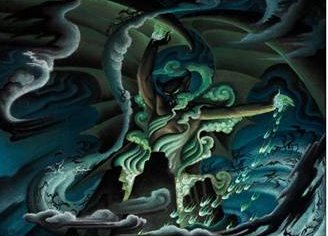 An iconic image from one of the most beloved animated films of all time, the “Night on Bald Mountain” Concept Painting from Fantasia by Kay Nielsen (Walt Disney, 1940) realized $59,750. The work of Nielsen, a Danish illustrator, was utilized heavily in the famed “Night on Bald Mountain” scene. This rare Nielsen original concept/story painting, features the Chernabog with bats, skeletons and flames surrounding Bald Mountain and is signed in the upper right corner by Nielsen.

Another legendary Disney image is depicted in Snow White and the Seven Dwarfs Old Hag and Snow White Production Cel Courvoisier Setup (Walt Disney, 1937), which soared past its pre-auction estimate before ultimately selling for $33,460. The extraordinary hand-inked and hand-painted image of the Old Hag offering the Poison Apple to Snow White captures a key scene from this landmark animated movie. This original Courvoisier cel setup, on a custom background for presentation purposes, came originally from the “Ray Bradbury Collection.”

From one of Walt Disney’s favorite artists, Mary Blair “It’s a Small World” Disneyland Painting (Walt Disney, 1964) nearly tripled its pre-auction estimate before bringing in $27,485. This original gouache-on-paper painting, measuring 14 by 18 inches, was done for the “Small World” exhibit in the Fantasyland section of Disneyland. This exact piece was held by Walt Disney and shown on the Wonderful World of Color episode called “Disneyland Around the Seasons” in what turned out to be one of Disney’s last appearances on the show.

One of the most legendary comics of all time is featured in A Charlie Brown Christmas Charlie Brown and Christmas Tree Production Cel (Bill Melendez, 1965) which more than quadrupled its pre-auction estimate when it crossed the block at $21,510. Written by Charles Schulz, the strip shows Charlie Brown as he defends his choice of the famous tiny Christmas tree” by claiming “I think it needs me!” This hand-inked, hand-painted production cel is on a photo print background for presentation purposes.

Other top Animation Art lots included, but were not limited to:

The top lot at the event was a Henry H. Cross “Baldwin Wagon Train Under Attack” Ghost Town Painting (1898), which sold for more than 40 times its pre-auction estimate when it drew a winning bid of $71,700. The painting was purchased by Walter Knott and displayed in Ghost Town in the early 1940s, and was spotlighted in the first issue of the Knott’s Berry Farm newspaper: the Ghost Town News. Cross was called “the greatest painter of Indians portraiture of all times” by Buffalo Bill Cody, worked as an artist for P.T. Barnum’s circus and was known for his portraits of Kit Carson, Wild Bill Hickock, Sitting Bull and Sioux chief Red Cloud.

One of the most visible attractions at Knott’s Berry Farm was the 1940 Jennie K Locomotive, which realized $40,630. Built in Pittsburgh, this H.K. Porter locomotive originally was owned by the Acme Brick Company in Malvern, Arkansas before ultimately being sold to Cedar Point Theme Parks.

A 1904 Caille Brothers Double Slot Machine (c. 1904) drew frenzied bidding before finishing at $38,240. When local tax authorities imposed a tax on each slot machine, the manufacturers and venue owners reacted by doubling and tripling the machines in a single cabinet in order to pay taxes once for multiple machines. This Big-Six Eclipse Twin oak double slot machine was re-purposed by Knott’s Berry Farm to become a double-token machine with a vending fee of 25 cents.

Other top lots from the Knott’s Berry Farm auction included, but were not limited to: