A 2020 LeBron James NBA Top Shot (Series 1) From The Top – Dunk No. 3/59 brought $387,600 during the sale, besting by a wide margin the previous record sale for the virtual sports cards that have reshaped the collectibles industry. Little wonder this would be the Top Shot to top the list (for now, anyway). 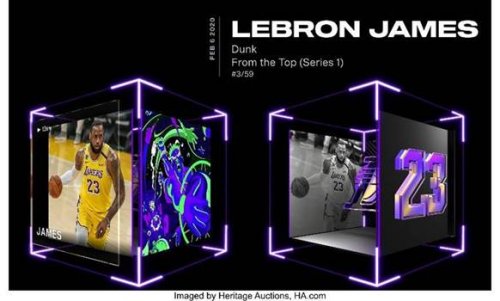 This is The Moment, from Feb. 6, 2020, when James paid homage to Kobe Bryant with a breakaway Staples Center dunk that seemingly reenacted an iconic Bryant reverse slam from nearly 20 years earlier. James would later tell EPSN the tribute was unintentional – “I just jumped and kind of figured it out, and then …it’s crazy how it’s the same exact dunk” – but it came at that perfect moment. Only one day later, Bryant and his daughter Gianna were laid to rest in a private ceremony.

“It was pretty dope,” Lakers center JaVale McGee told ESPN later. “It was extremely accurate and damn near identical. … That’s really some legendary stuff right there.”

In only a matter of months, Heritage Auctions has become the go-to Top Shot auction house, now with two Moments on the Top 5 Top Shot sales list. The other is a 2020 Zion Williamson NBA Top Shot Rookie Debut (Series 1) No. 1/192, which sold on Feb. 28 for $162,000. In all, Heritage has sold 20 of the NBA’s highly sought-after digital Moments, with more to come in May. 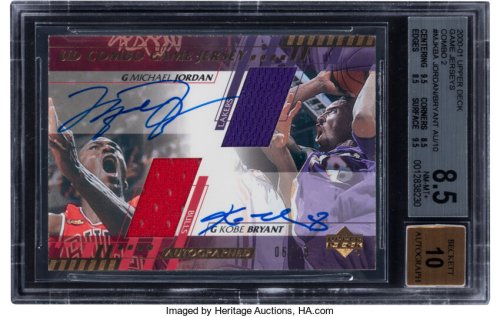 “Quite simply, there’s never been a more exciting time to be part of this amazing hobby,” says Chris Ivy, Heritage’s Director of Sports Auctions. “Every day, more collectors flock to sports cards, and a thing we love as kids clearly remains a passion and pursuit for so many today.”

This sale was the only the second of its kind in the nearly 20-year history of Heritage Auctions’ Sports Category — fewer than 500 lots in a sale that featured only material already graded and/or authenticated by a leading third-party service when consigned. It ran for two weeks, from opening to extended bidding, to better shrink the window between consignment, auction and payment. And unlike most of Heritage’s sports auctions, it was done without a catalog.

Heritage has been the worldwide leader in sports memorabilia for almost two decades, through its semi-annual events and weekly sales. To better serve the increased demand for sports cards and memorabilia, in March the auction house added this monthly special – which has proven astonishingly successful in a very short time.

Indeed, the extraordinary success of this sale and March’s kick-off (which scored $3.3 million) serves as an exciting prelude to the May 6-8 Springs Sports Catalog Auction, which is now open for bidding and features among its myriad highlights one of the rarest Babe Ruth rookie cards, the forever-coveted T206 Honus Wagner and a seldom-seen photo-matched Michael Jordan jersey dating back to his NCAA Player of the Year days.