Heritage Auctions offers the 1970’s Topps PSA Set Registry Collection, which ends on August 20-22, 2015.  It was Yogi Berra who once criticized an old haunt with the statement, “Nobody goes there anymore. It’s too crowded.” There are many in the trading card collecting community who share that opinion of the “modern” market that dawned in the 1980’s, ushering in a flood of new brands and massive print runs that utterly upended the balance of supply and demand. It is arguably the most significant paradigm shift in the history of the hobby.

So there’s a strong affection for the last defenders of the old hobby order, for the days of wax packs and stale gum when collecting was only a labor of love, unsullied by the creeping incursion of capitalist considerations that we report here with full appreciation for the irony. But then, to paraphrase a quotation perhaps improperly assigned to Berra, “Nostalgia ain’t what it used to be.” 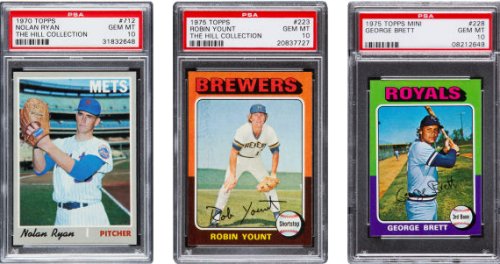 In this auction, we revisit the twilight of that golden age, the finest collection of 1970’s trading cards ever assembled. These are sets that come to us from the pinnacle of the PSA Registry, broken down into individual, single-card lots to preserve the unique joy of set building that made us fall in love with collecting in the first place. Nearly half enjoy a Gem Mint 10 rating, with the balance narrowly missing that loftiest assessment. So throw on a pair of bell bottoms, crank up the disco music, and dig in. Remember to bid early and often to afford yourself the widest array of options when the auction reaches the Extended Bidding phase beginning at 10 PM Central time on closing night.