Heritage Auctions will present a fascinating assortment of home run baseballs in its February 2017 Platinum Night sports collectibles auction, which will be open for Internet bidding from late January until closing Feb. 25-26, 2017. The hammered horsehide derives from the only known comprehensive collection of home run baseballs hit by every Major League player who has hit at least 500 home runs.

“I don’t believe that so many examples have ever appeared in a single auction,” said Chris Ivy, Director of Heritage Sports Collectibles. “We’ve got home run balls from Jimmie Foxx, Hank Aaron, Willie Mays, Reggie Jackson, Ernie Banks – the list goes on and on.”

The collection will be the first major offering of home run baseballs by Heritage since Babe Ruth’s 702nd commanded $191,2000 in the August 2014 Platinum Night auction.

Among the spectacular highlights: 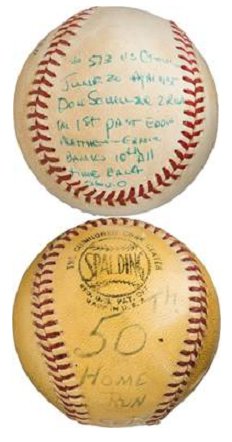 Willie Mays Signed Home Run Baseball – No. 50 Baseball of 1965 season / No. 503 career (est. $10,000): While any Mays home run baseball carries enormous collecting intrigue, one placed in such close proximity to the 500th of his career and 50th of the season only add to the demand.

Heritage Auctions is the largest auction house founded in the United States and the world’s third largest, with annual sales of more than $800 million, and over one million online bidder members. For more information about Heritage Auctions, and to join and receive access to a complete record of prices realized, with full-color, enlargeable photos of each lot, please visit HA.com.