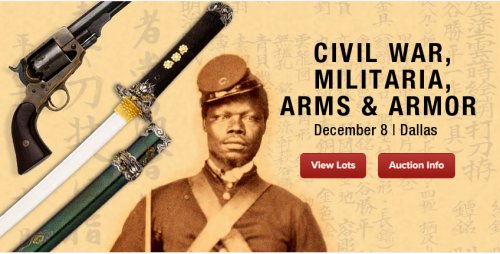 “This collection has been called the finest to come to auction since Dr. Walter Compton’s collection sold in 1992,” Heritage Auctions Arms & Armor Consignment Director David Carde said. “There is extraordinary historical significance to some of these pieces, some of which are going to auction for the first time.”

Among the top lots in the collection is a Spectacular Museum-Worthy Juyo Heavy Silver High Relief Dragon Mounted Wakizashi with Signed Fuchi and Tsuba (estimate: $25,000+), which features a 58.7-cm cutting edge and wild medari hamon with tobiyaki spots. The blade has superbly cut bohi (grooves) through the nakago. The kosharae are of the finest quality throughout the cast and chased high relief fuchikashira with gold highlights. The koiguchi is of heavy silver, and the menuki of hosokaugua mon appears to be solid gold.

Among the top lots outside the sword collection is a Huge Civil War Archive of Colonel Isaac Dyer 15th Maine (estimate: $26,000+). Col. Dyer, who later became a Brevent Brigadier General, served with the 15th Maine from December 1861 through September 1865. Housed in two wooden trunks Dyer brought to Maine is a virtual time capsule of materials from Dyer’s travels through the War Between the States. Among the contents are:

A Cased & Highly Engraved Matched Pair of Beretta S06 EELL Over & Under Shotguns, Engraving by Giancarlo Pedretti (estimate: $25,000+) include serial numbers A01169B and A01170B on the barrels and receiver of each weapon, each of which features a blued finish, as well as an elaborately scroll engraved coin-finished receiver, a blued lever and triggerguard and a gold-plated trigger.

A Union Corporal’s Forage Cap & Frock Coat Set Id’D to Corp. George Schmultz of Co. G, 188th Pennsylvania (estimate: $24,800+) was pictured on pages 20 and 21 in The Illustrated History of American Civil War Relics by Stephen W. Sylvia and Michael J. O’Donnell published in 1978. At the time, the items were in the Collection of John Henry Kurtz. Included are an excellent Forage Cap with brass lettering denoting Corporal Schmultz’s unit with a “G” over “188” over “PV,” which stands for “Co. G, 188th Pennsylvania Volunteers.” Also included are one of the nicest known examples of an 18th Corps Badge and an outstanding cap with all original insignia.