Heritage Auctions’ inaugural Sports Monthly Showcase Auction realized $3.3 million upon closing early Friday morning.  This sale was the first of its kind in the 15-year history of Heritage Auctions’ Sports Category – fewer than 400 lots in a sale that featured only material already graded and/or authenticated by a leading third-party service when consigned. It ran for two weeks, from opening to extended bidding, to better shrink the window between consignment, auction and payment. And unlike most of Heritage’s sports auctions, it was done without a catalog.

And yet, like Heritage’s record-setting catalog auctions, here, too, new highs were reached. Like when Mickey Mantle’s iconic 1952 Topps card, graded a far-from-mint condition PSA 3, realized $162,000, more than five times its original estimate. Or when one of the 1910 Ty Cobbs that emerged from the Black Swamp Find in 2012 re-emerged to sell for $66,000, almost twice its estimate. Or when Roberto Clemente’s 1955 rookie Topps card, in a PSA 8, realized $78,000, also twice estimate.

“Obviously this has been an extraordinary year for sports memorabilia – cards, of course, especially,” says Chris Ivy, Heritage Auctions’ Director of Sports. “But what we often forget to mention is how absolutely fun this is, sharing new finds and old favorites with collectors. The numbers have been nothing short of staggering in the last 12 months, yes. But let’s not forget, too, the thrill and joy that comes with trading up to get that once out-of-reach card you’ve always needed to complete a collection.” 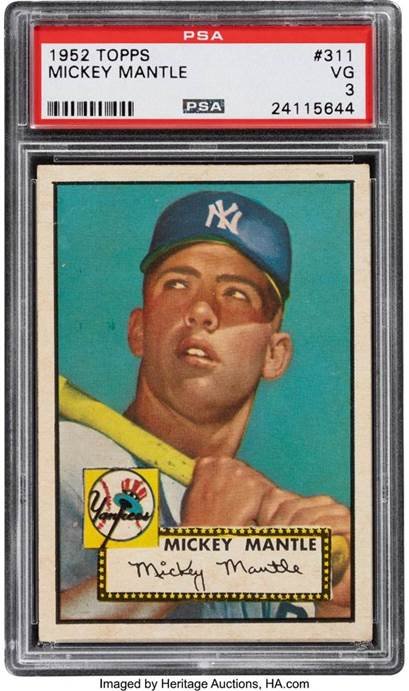 With some thousand participants in the speedy sale, it introduced newcomers to reasonable iterations of coveted rarities, including Jackie Robinson’s gorgeous 1948 Leaf card, which, in a PSA EX 5, more than doubled its estimate when it realized $48,000. And it sated the appetites of hobby veterans looking for The Next Big Thing, such as the LeBron James Kobe Bryant Tribute NBA Top Shot, which realized $62,400, or factory-sealed boxes of potentially undiscovered treasures. In this sale, a factory-sealed box of 1996 Topps Chrome Basketball cards realized $48,000, appropriately above estimate given the possibility of finding a rookie Kobe inside.

Heritage became the worldwide leader in sports memorabilia through Platinum Night events and weekly sales that continue to grow. But in recent months the auction house has added new and special events in response to the increased demand for sports cards.

The next Sports Monthly Showcase sale opens April 1 and goes into extended bidding at 10 p.m. Central time April 15. Consignments are being accepted now for all future sales. Batter up.