The world record for a post-war jersey was one of several that fell at Heritage Auctions as Jackie Robinson’s only known surviving 1947 Brooklyn Dodgers rookie jersey drew a winning bid of $2.05 million to anchor $13.6 million in sales over a four-day span. A third major auction, closing Dec. 10, may bring sales to more than $20 million in the span of a month, the largest monthly tally for sports auctions since the famous Barry Halper sale of 1999.

“It’s been a grueling but gratifying experience,” said Chris Ivy, Director of Sports Collectibles at Heritage Auctions, of preparations for the most lucrative month of 21st century sports memorabilia auction history. “We were pleased to see that prices remain very strong despite the enormous volume — it’s a real testament to the strength of the hobby, and to our status as the world’s largest collectibles auctioneer.” 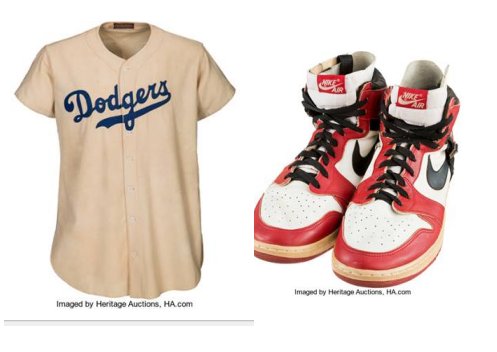 High-grade single trading cards and game worn jerseys supplied the bulk of the high-five and six-figure results of the long weekend. Noteworthy results of the former include a $408,000 result for a PSA NM-MT 8 example of the fabled 1952 Topps Mickey Mantle rookie, and $264,000 for a 1916 Standard Biscuits Babe Ruth graded PSA EX-MT 4. The first great bubble gum issue—1933 Goudey Baseball—supplied the event with two major highlights: $38,400 for a Mint 9 Mel Ott, and $52,800 for a signed example of Babe Ruth’s #53 card.

A new champion was crowned on Sunday, Nov. 19, as a winning bid of $55,000 for a pair of customized Nike Air Jordan I Sneakers – worn by its legendary namesake upon his return from a November 1985 injury – set a record as the highest price ever paid for sneakerdom’s most celebrated style.

The ultra-rare pair was altered to include ankle support to protect Jordan’s healing left foot, and bears a period inscription and signature from the future Hall of Famer.

“For a global audience of Jordan collectors, this is as good as it gets,” explained Chris Ivy, Director of Sports Collectibles at Heritage Auctions. “Only a tiny handful of game worn Jordan I’s are known to exist, and this unique pair is by far the rarest and most desirable of that breed, as our result would confirm.”  The sneakers sold during a four-day, two-auction series at Heritage Auctions that resulted in $13.6 million in total sales.