It was just announced that Captain Eugene Cernan passed away at age 82 in a Houston hospital surrounded by loved ones. This comes way too soon after the death of another of America’s heroes, John Glenn. While Glenn’s orbital flight in Friendship 7 was America’s second major step toward landing on the moon, Cernan flew in space three times, and each time he set the bar a little higher for those that would come after. Let’s take a look at his space missions and comments he made about them.

Gemini 9A: Mission Pilot Cernan performed the second-ever American EVA. The problems he experienced with his air-cooled suit forced NASA back to the drawing board and they designed a superior water-cooled EVA suit for Apollo astronauts. In his book The Last Man on the Moon, he commented that his spacesuit had “all the flexibility of a rusty suit of armor.” 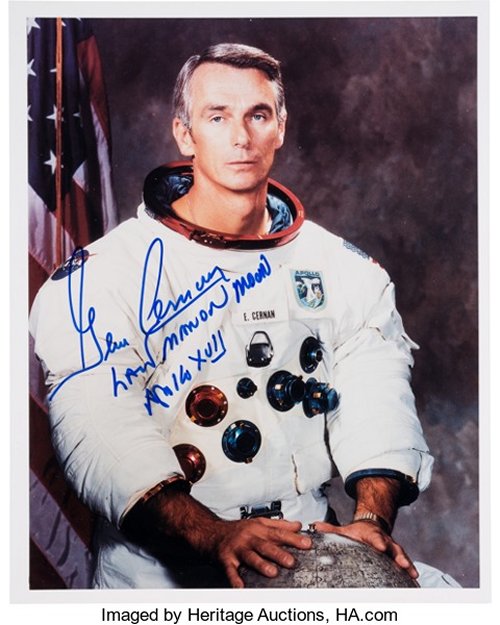 Apollo 10: Mission Lunar Module Pilot took the Lunar Module Snoopy to within 8.4 nautical miles of the lunar surface in a dress rehearsal for the soon-to-come Apollo 11 landing. In a 2007 NASA interview, he said of this mission: “I keep telling Neil Armstrong that we painted that white line in the sky all the way to the Moon down to 47,000 feet so he wouldn’t get lost, and all he had to do was land. Made it sort of easy for him.”

Gene Cernan Signed Large Apollo 17 Lunar Surface Color Photo with Extensive Handwritten Quote Apollo 17: Gene Cernan commanded this mission, the last manned lunar landing. This was the first and only Apollo night launch and the last manned Saturn V launch. Cernan and LMP Harrison Schmitt spent three days on the lunar surface carrying out numerous scientific experiments. When preparing to enter the Lunar Module Challenger for the trip home, Cernan closed his final remarks with: “America’s challenge of today has forged man’s destiny of tomorrow. And, as we leave the Moon at Taurus-Littrow, we leave as we came and, God willing, as we shall return, with peace and hope for all mankind. God speed the crew of Apollo 17.” He later described that moment: “Those steps up that ladder, they were tough to make. I didn’t want to go up. I wanted to stay awhile.” Cernan called looking back at earth: “sitting on God’s front porch, looking home.”

Through the years, Heritage was privileged to offer a number of important pieces from Cernan’s collection.

God speed Captain Cernan. Even for one who has been on the moon, your view must really be incredible now. We will certainly miss you.

If you have quality material to consign to our upcoming Space Exploration Auction #6173 on May 19th, please send a detailed list (clear images are required for autograph material) to MichaelR@HA.com. We will let you know estimated values and explain the easy consignment process.

(Above Written By Michael Riley)