Nearly 2,000 lots feature the finest game used gear, autographs and general sports ephemera in the marketplace packs the most important sports memorabilia auction of the season. Heritage Auctions’ Spring Memorabilia Auction is open for bidding at HA.com/50013 and will close in extended bidding format, May 16-17. 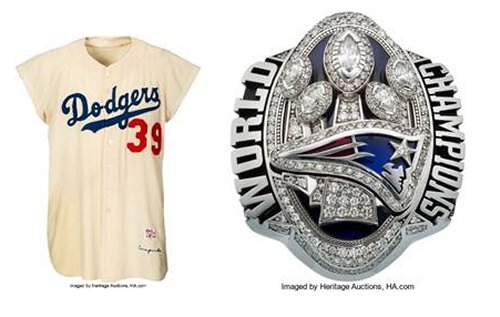 The auction event may draw more than $4 million in bids and the beloved backstop of the Brooklyn Bums is positioned to notch the top result in the sale: Roy Campanella’s 1956 home white flannel jersey likely to surpass its $100,000-up pre-auction estimate.

The largest Super Bowl ring ever designed — issued to members of the 2016 New England Patriots — bears a pre-auction estimate of $60,000-up. It is the first of its kind to see the hobby’s auction block.

Hall of Fame outfielder Enos Slaughter, best remembered for scoring the winning run in the 1946 World Series with his legendary “Mad Dash,” supplies over 200 lots for consideration, each accompanied by a letter of provenance from his family. Best in the grouping are rings issued for his 1985 Hall of Fame induction and a replacement for his lost 1946 World Championship model.

Important game worn jerseys include specimens from the lockers of Warren Spahn, Dick Butkus, Lance Alworth, Sonny Jurgensen and Guy LaFleur. Modern examples include the jersey worn by Colin Kaepernick for his first NFL regular season appearance, and the very last ever worn by unanimous 2019 Baseball Hall of Fame inductee Mariano Rivera before his retirement.

Championship rings include player models from the 1994 San Francisco 49ers, the 2013 Seattle Seahawks and every World Series ring of the New York Yankees issued between 1996 and 2009.

Heritage Auctions’ Spring Sports Memorabilia Catalog Auction, No. 50013, is open for bidding and will close in extended bidding format at 10 p.m. CT, May 17.