Serious collectors and baseball and sports fans alike will have the opportunity to thumb through baseball’s history books and acquire images from the game’s “golden age” (which ran from about 1920 through 1960), including photos of some of the greatest players who ever threw a pitch or swung a bat at Heritage Auctions’ Vintage Sports Photography Catalog Auction May 20.

Among the top lots in the auction will be a 1927 Lou Gehrig Original Photograph by Charles Conlon — used for 1933 Goudey Card, PSA/DNA Type 1 (est. $20,000+). Gehrig is universally known for his streak of consecutive games, but he also is one of the greatest first basemen of all time, averaging an incredible .92 runs batted in per game for his entire career. (For comparison, consider the average RBI per game in the careers of some of baseball’s other immortals: Babe Ruth .88, Ted Williams .80, Hank Aaron .70, Willie Mays .64, Mickey Mantle .63.) After retiring because of the disease (amyotrophic lateral sclerosis) now known to many as “Lou Gehrig’s Disease,” Gehrig became the first player in any sport to have his number retired when the New York Yankees announced in 1939 that no future player ever would wear Gehrig’s No. 4. 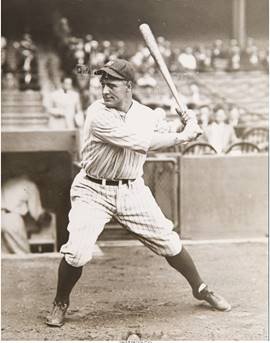 There are many who still consider Babe Ruth the greatest player in the game’s history at any position. The larger-than-life Yankee clubbed moonshot home runs at a record pace, even during baseball’s “dead ball era.” A record that stood for 34 years is shown in this 1927 Babe Ruth 60th Home Run Original News Photograph, PSA/DNA Type 1 (est. $8,000+). The image is unique, not only because it shows one of the sport’s icons crossing home plate while setting a record some assumed might never be broken, but also because it shows Ruth being greeted at the plate by Gehrig and Eddie Griffin, the Yankees’ batboy who also doubled as something of a mascot and/or good-luck charm for the team. Griffin’s tenure with the team coincided with a remarkable run of success for the Pinstripes, who won seven league pennants and four World Series championships during Griffin’s 12 years with the team.

One of the most famous speeches in the history of sports is shown in this 1939 Lou Gehrig Farewell Speech Original News Photograph, PSA/DNA Type 1 (est. $8,000+). His career ended by ALS, Gehrig stood before a somber crowd of people not yet ready to bid him farewell. As teammates and fans wept, Gehrig delivered his infamous speech in which declared himself “the luckiest man alive” — a line every sports fan can quote and a speech that still evokes emotional reactions eight decades later.

No baseball player ever had the cultural impact of Brooklyn Dodgers legend Jackie Robinson. This 1949 Jackie Robinson Original news Photograph Used for 1950 Bowman Card by Barney Stein, PSA/DNA Type 1 (est. $4,000+) shows the Hall of Fame second baseman completing a practice swing at iconic Ebbets Field in an image that Bowman used the following year for a Robinson card.

Part of one of the greatest teams in baseball history is documented in this 1927 New York Yankees Original News Photograph, PSA/DNA Type 1 (est. $3,000+) — an image that does not immediately bring to mind thoughts of a team with such a powerful lineup that it earned the nickname “Murderers’ Row.” Immediately recognizable, of course, is the legendary Babe Ruth, and Bob Meusel stands an inch taller than the 6-foot-2-inch Ruth and looks at least as strong and athletic. But sandwiched in between them is the diminutive Miller Huggins, whose 5-foot-6-inch frame carrying just 140 pounds, was the first great Yankees manager, winning six pennants and three World Series titles. Also pictured are two other key members of the New York lineup: Waite Hoyt and Bob Shawkey.

This 1955 Roberto Clemente Rookie Year Original News Photograph, PSA/DNA Type 1 (est. $2,000+) offers one of the earliest glimpses — this one shot at Forbes Field — of Clemente, the Puerto Rican outfielder who dazzled fans for 18 seasons, all of which were spent with the Pittsburgh Pirates, with his exceptional hitting (he averaged .317 for his career, piling up exactly 3,000 hits), electric speed on the basepaths and in the outfield, and a throwing arm that still is the standard by which many are judged.