The most surreal NBA season in memory is scheduled to reach its climax by the beginning of October, when The Finals are set to finally burst The Bubble. But at that very moment, there will be considerable action off the court, as well, courtesy Heritage Auctions’ Michael Jordan & Basketball Icons Sports Catalog event, which is open for online bidding now and goes into extended bidding Oct. 3. 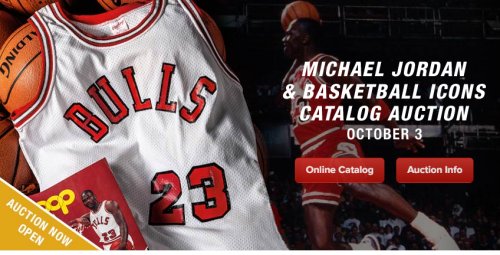 Every one of the 375 lots offered in this sale is an enormous piece of the NBA’s history – quite literally in the case of the Staples Center floor autographed by Kobe Bryant. This one-of-a-kind item consists of four panels, each measuring four by eight feet. It’s a remarkable keepsake from Bryant’s final game, on April 13, 2016, for which the late Laker authored a storybook ending: 60 points followed by a heartrending speech after which he signed the numbers “8” and “24” emblazoned on the hardwood in The House Kobe Built.

The Los Angeles Lakers kept the signed section of the floor bearing the No. 24. But the signed No. 8 is now available, with the consignor offering 10 percent of the proceeds from the sale to the Mamba & Mambacita Sports Foundation, a nonprofit intended to further Kobe and Gianna Bryant’s legacy through charitable endeavors in sports.

As the auction’s namesake, Jordan of course dominates this event as he did during his playing days and long after, with The Last Dance on a seemingly endless loop during much of 2020.

One of the top lots in this event is a Chicago Bulls uniform – complete with the jersey and shorts, a rare two-fer among collectors – Jordan wore during the 1986-87 season. What makes this garment so remarkable is the fact it has been photo-matched to at least five games during that season, including the March 24, 1987, dust-up with the Philadelphia 76ers during which Jordan dropped 56 points.

This is also the uni that adorns the Nov. 17, 1986, cover of Sports Illustrated – the one proclaiming Jordan as the “One Man Gang.”

Speaking of magazine covers: In this auction you’ll also find the earliest-known Jordan jersey to come to auction, from his 1984 rookie season. It’s the very top the baby-faced newcomer wore on the cover of the January 1985 issue of Hoop magazine and the front page of the team’s 1984-85 yearbook published before the first tip of the new season.

Not only is this jersey photo-matched to both photo shoots, but it comes with quite the story from Corrine Zartler, at the time a rookie public relations assistant for the Bulls tasked with setting up the shoots – and making sure the kid was properly attired for the moment.

Of course, there are several pair of Jordan’s shoes running throughout this special event, many of them signed. Few items in any category have been more coveted among collectors in the wake of The Last Dance’s unceasing popularity.

There are signed photos and posters. An autographed yearbook from that rookie season. Signed balls and caps and an autographed golf bag. Even a signed check from 1998, payable to a casino owned by Donald Trump.

Something, truly, for everyone who ever wanted to Be Like Mike … or just own something he once touched.

“In recent months, we’ve seen extraordinary reaction from collectors who have so many great Jordan items that we were compelled to put together this dedicated, singular auction,” says Chris Ivy, Heritage’s Director of Sports Auctions. “And once we began assembling it, other consignors began stepping up with amazing pieces from throughout basketball’s rich history featuring some of the sport’s brightest lights and biggest names.”

There are items here, as well, from the other Greatest Of All Time, LeBron James: a signed game-worn Cleveland Cavaliers jersey, which King James gifted to teammate Daniel Gibson; a 2004 Topps Chrome Superfractor No. 23, graded PSA Gem Mint 10, of which there is but one in existence; and, from 2005, an oversized, autographed Nike “We Are All Witnesses” print of which there were only 25 made.

And then there are the kids and comers determined to prove themselves equal to the best who ever played.

This event features a Giannis Antetokounmpo game-worn Milwaukee Bucks jersey photo-matched to the Nov. 29, 2019, game against the Cavs. There’s a photo-matched jersey Dallas Mavericks superstar Luka Dončić wore March 8, 2019, against the Orlando Magic during his Rookie of the Year season. And there are three tops worn by his Mavs predecessor and future Hall of Famer Dirk Nowitzki, including a jersey from No. 41’s final season of 21 with a single team.

Each lot here triggers a highlight reel, a treasured memory, a nod of appreciation and affection. There are, of course, the high-dollar investment pieces – the complete set of PSA Gem Mint 10 1986 Fleer Basketball cards, featuring the Jordan rookie card that continues to set records with each sales, for instance, and many sealed boxes of sought-after wax packs alongside highly graded and highly coveted modern cards.

But there are also a leather red-white-and-blue American Basketball Association balls used during the 1973-74 and 1975-76 seasons. And a ball signed by Detlef Schremph awarded to him in 1995, when he hit 10,000 career points as a member of the Seattle Supersonics. And rookie cards belonging to hardwood heroes such as Larry Bird and Magic Johnson (on the same card!) and the legend once called Lew Alcindor.

Items enough to fill a few halls of fame, from men already there.

(Here, then, in no particular order are 10 (well, OK, 11) of the top modern cards available in the Basketball Icons event.)

The 2004 Chrome collection, which was actually released in February 2005, is widely regarded as one of Topps’ most iconic modern basketball sets given the look and the lineup. And this gem-mint-condition Lebron James Superfractor is the best of the best: It’s a second-year card, as quintessential as any rookie-year offering, and there’s only the one. Not even LeBron can boast of having this in his collection. Not yet, anyway.

Second-year cards have started to spike in value – sharply, too – in recent months, and the stars of today have benefited from this most of all, especially the man known as the “Greek Freak,” who, on Sept. 18, was named the NBA’s MVP for the second year in a row. No wonder these Giannis second-year Prizm inserts are starting to see a lot of buzz. They’re phenomenal investments, yes, but also beautiful pieces of modern-card history-in-the-making.

Zion Williamson may not yet have proved himself the player everyone knows he can be. But there remains the expectation that come next season, he’ll begin flashing his promise. Already the market expects great things, as evidenced by the fact this rookie-patch autographed card from one of modern basketball’s most beautiful collections is already seeing bids exceeding the $10,000 pre-auction estimate.

Three of modern-day basketball’s most influential players adorn this card, alongside some pretty interesting facts about each player on the back. Among the trivial pursuits: James was an All-State wide receiver, Anthony enjoyed visiting the White House – while Wade always wanted to be a sports broadcaster, a dream he’s currently fulfilling.

Star, hero, icon, myth – Kobe Bryant was all those things, and more, long before the tragic helicopter crash in January. It was only inevitable that collectors, casual and serious, would turn to Bryant’s cards in recent months. And this beautiful autographed Hoops Ink card is a remarkably inexpensive investment in a legend.

One of LeBron James’ rarer rookie autos, this card numbered only to 25 is extremely undervalued with its estimate of $20,000. The only reason it isn’t a $50,000 card is most likely the BGS 8.5 slab with two 8.5 subs – and, it’s a tough set to grade highly given the production quality.

From Donruss’ inaugural Optic set, this Lebron James base card is becoming extremely desirable to modern collectors – in no small part because it shows James finishing a layup over Kobe Bryant. Reasonably priced now but likely not for long.

This Michael Jordan patch auto is a highlight reel that fits in the palm of your hand: It features a beautiful three-color prime cut from one of his Chicago Bulls jerseys, alongside a signature graded BGS 10. A hard card to turn down. Or put down.

What’s better than a quad relic-auto featuring four of the sport’s most legendary players? No, that is not a trick question. Beautiful in every day – from the blue signatures, two on each side, with small pieces of their jerseys next to each.

For many, a favorite Lebron James rookie offering, in large part because this card shows a very young Lebron standing atop the Cavs name, with a baby-faced King James till a prince grinning in the background. The fact this is a refractor adds even more beauty to the card design. A modern gem – modern art, even. And, for the moment, reasonably priced.