Ronnie Lott, the greatest safety in National Football League history, started the nonprofit All Stars Helping Kids in 1989 to benefit children growing up in low-income and marginalized communities. Now the Pro Football Hall of Famer and San Francisco 49ers’ first-round draft pick in 1981 once again suits up to disrupt the cycle of poverty impacting Bay Area children.

More than 135 items from the estimable Ronnie Lott Collection will be available during Heritage Auctions’ May 12-14 Sports Catalog Auction, with a portion of the proceeds benefitting All Stars Helping Kids. The auction, packed with all-star memories spanning his career and those of other Hall of Famers from football, basketball and baseball, is now open for bidding.

“When you think of the COVID situation, of all the angst we’ve seen over the last three or four years, it just made me realize there’s just so much more to do in terms of trying to help young people,” Lott says. “When I was a kid, I had so many people doing the same thing for me – trying to educate me, trying to find ways to lift me up. And there is no better time now to hold this auction, when we’re still in a very challenging, difficult time.” 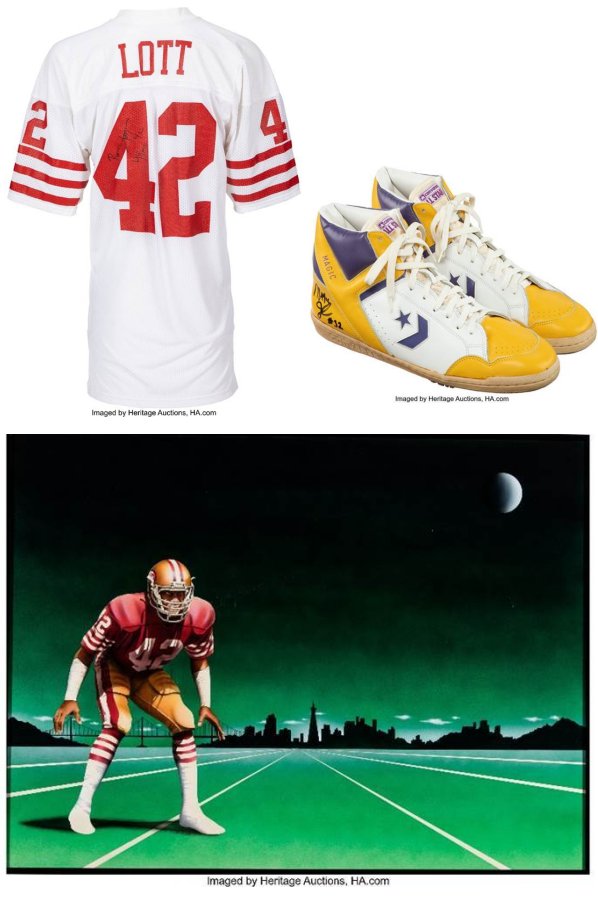 The items Lott is offering span his remarkable career, from the game-worn and signed jersey photo-matched to 1990’s Super Bowl XXIV in New Orleans – when Lott scored his fourth title with the 49ers! – to his Kansas City Chiefs jersey worn during the 1995 pre-season. Here, too, are jerseys worn during his time with the New York Jets, including a game-worn jersey photo-matched to the Nov. 21, 1993, tussle with the Cincinnati Bengals; and others from his Pro Bowl and Hula Bowl appearances, alongside his “EA Sports Gamers” jersey awarded to Lott by the makers of Madden NFL and worn in 2012.

Lott is also offering his signed copy of the 49ers’ 1987 playbook, his maroon satin University of Southern California jacket from the 1980 Rose Bowl and a framed Trojans jersey. He also brought to Heritage items he signed alongside his fellow Hall of Fame teammates, including a Candlestick Park seat back bearing the signatures of Jerry Rice, Joe Montana and Steve Young and a bronze helmet likewise signed by all four 49ers greats.

“As an avid football fan since the age of 9, I saw Ronnie Lott play from a rookie to the end of his career, and he’s the greatest safety I’ve ever seen play and one of the greatest defensive players of all time – and that’s a fact,” says Heritage Auctions Executive Vice President Derek Grady. “When he decided to hold this auction, I met with him and his family, and aside from the fact he was one hell of football player, he’s also just a genuinely wonderful guy. His nonprofit, and the auction being held to benefit it, proves that.”

But Lott’s collection extends far beyond his own Hall of Fame career.

Over the years he accrued numerous keepsakes from other sporting greats he counts among his friends, among them a pair of circa-1987 Converse Weapons game-issued and signed by Los Angeles Lakers legend Magic Johnson; 1992 Dream Team jerseys signed by Johnson and Larry Bird; a signed bat from Mickey Mantle commemorating his 536 lifetime home runs; a photo-matched game-worn Dave Parker Toronto Blue Jays Jersey from the 1991 season; and a New York Giants helmet bearing a note from Lawrence Taylor that reads, “To my man, Ronnie Lott. Good luck in the life after football that is!”

Lott has long treasured each piece in the collection. But he has no doubt each of the men who gifted him these treasured memories would absolutely support his decision to sell them on behalf of a nonprofit whose sole purpose is to benefit children in need of a fighting chance.

“We work with untapped and overlooked youth in low-income communities and provide them with opportunities to achieve their full potential, and that’s what Ronnie has been excited about,” says David Greco, executive director of All Stars Helping Kids. “His commitment has always been: How do we provide these disadvantaged youths with the opportunity to achieve all they are capable of?”

“These are all amazing items, but they’re providing opportunities to save lives,” Lott says. “That is how I was raised, what my parents taught me. Do the right thing at the right time, and it will come back to help you somewhere down the road. So many of our kids have been left behind, especially over the last two years, and we’re going to need more resources as we continue to come out of this. It’s important we look at ourselves and know things like this could be the difference for so many who need so much.”