Legendary stories, personalities and seasons are inextricably linked to Chicago, essential to its energy and identity as one of the great sports towns. Perhaps no image is more iconic, more indelibly printed in the sports world’s collective memory than Chicago Bears coach Mike Ditka in his navy-blue sweater vest boldly emblazoned “BEARS.” Heritage Auctions is delighted to announce that this very sweater, worn by Ditka on Jan. 26, 1986 – otherwise known as Super Bowl XX game day – is available in the Aug. 27-28 Summer Platinum Night Sports Auction.

The sweater survives in perfect condition, forever linked to the Bears’ 46-10 thumping of the New England Patriots at the Superdome in New Orleans. Ditka set the item aside for posterity, untouched or even displayed for decades, and now consigns the legendary garment to auction. The sole tagging in the sweater is an “XXL” marker at the interior collar, representing not only the clothing size, but the outsize reputation of this team and its players. From classic Saturday Night Live skits with Ditka super-fans to the Billboard Hot 100 hit “The Super Bowl Shuffle,” the Chicago Bears of this era are unforgettable. 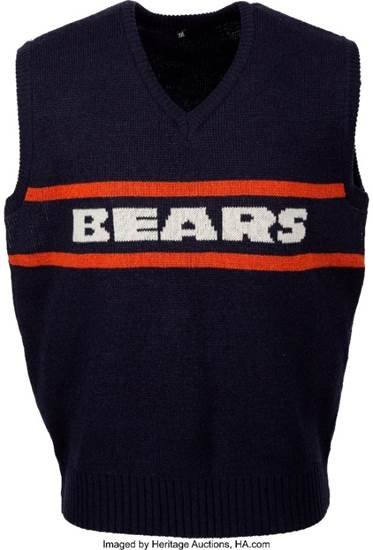 Consigned by Ditka Himself….“The sweater vest is iconic and legendary, just like the man himself,” say Ditka’s son and daughter-in-law Mark and Stacy Ditka. “Polished, colorful and bold, it represents a moment in time that is so meaningful not only to our family and Bears fans, but to so many people who were caught up in the spirit of this team. We hope whoever takes home this win will continue to enjoy that great energy.”

Chicago boasts victory across almost every major sporting category, but basketball is surely among the most celebrated. Power forward Horace Grant provides all three of his Chicago Bulls three-peat championship rings at auction, from 1991, 1992 and 1993. This was the Bulls’ age of dominance in the city as the team enjoyed a decade of fantastic success with Grant playing a vital role in the Jordan era. All size 12, the rings present beautifully and represent a rare opportunity to own a set of consecutive rings from a star player of this time.

As Ernie Banks neared the end of his storied career with the Chicago Cubs in the early 1970s, a chapter in baseball-uniform history was closing as well. Heritage Auctions offers Banks’ 1970 game-worn and signed Chicago Cubs jersey, MEARS A10. This three-season Cubs road style was the last of the flannel era, as the Cubbies trotted this look out one last time for Banks’ farewell season of 1971 before transitioning to knits. Signed at the upper left chest in black Sharpie, this is a relic as worthy of the Hall of Fame as the man who wore it.

These and many more Chicago-specific items available for sale in the Aug. 27-28 Summer Platinum Night Sports Auction offer incredible opportunities for fans to own and honor Chicago sports history and its legendary figures.

“One of the great joys of this job is bringing to auction treasures from throughout sports history,” says Heritage’s Director of Sports Auctions, Chris Ivy, “and it will be a pleasure helping these amazing Chicago sports artifacts find new collections in which they will be cherished.”