The 48-Star U.S. flag that led the first American troops to Utah Beach on D-Day, June 6, 1944, replete with a bullet hole from a German machine gun, will cross the auction block in Dallas, TX on June 12, 2016. It will be sold as part of Heritage Auctions’ Arms & Armor/Civil War & Militaria Signature® Auction and is expected to bring more than $100,000.

“This flag is easily one of the most significant artifact of the D-Day invasion that exists in private hands,” said Marsha Dixey, a Historical expert and Consignment Director at Heritage Auctions. “We all know the harrowing story of those chaotic dawn hours as America made its push onto the beaches of Normandy. The fact of its survival is nothing less than a testament to the irresistible force of the American will.”

The flag was flown from the stern of U.S. Navy vessel LCC 60 – the sole guide boat at Utah Beach – and was retained by its skipper, Lieutenant Howard Vander Beek, for more than six decades before his death in 2014. It was acquired by the current consignor from an estate auction in Vander Beek’s home state of Iowa. 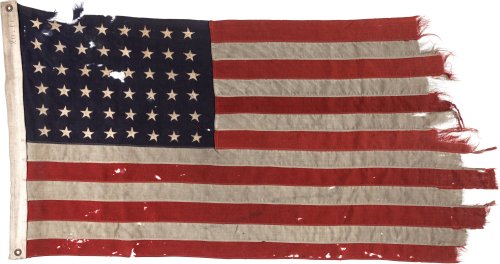 D-Day saw the unleashing of the largest assault force in the history of warfare upon the fortified coastline of Nazi-occupied France. More than 1,000 aircraft and 5,000 boats transported nearly 160,000 Allied troops across the English Channel to the lethal 50-mile stretch of Normandy, establishing a port that would ferry two million more troops into the western theater by the end of August. The day would prove to be the first of a Nazi retreat that would end with Adolf Hitler’s suicide in a Berlin bunker less than a year in the future.

“D-Day is rightly considered the greatest and most essential victory ever claimed by American armed forces,” said Dixey, “and is the single event that best represents the United States as the world’s leading force for good.”

The Navy had commissioned six radar-equipped Landing Craft Control boats to lead the rush to the two American landing zones – three for Omaha Beach and three for Utah Beach. Between human error and the capricious weather, LCC 60 would be the only one of the Utah Beach-bound crafts to survive the Channel crossing.

In the fog of war, both literal and figurative, LCC 60 missed its initial mark, leading the first invasion wave to a debarkation 500 yards from the “x” on the map. The error, however, proved an extraordinary stroke of good luck. The new landing point found a soft spot in the German defenses, whereas the fortification at the intended entry point had survived the pre-invasion shelling intact. Lieutenant Vander Beek and his LCC 60 crew were relieved of their primary control duties at 1400 hours, after seven-and-a-half hours in Rommel’s Death Zone and 19 charges to the beach.

The most recent major auction offering of a Normandy invasion flag came upon the 70th anniversary for the tattered banner that flew from LST-493, which arrived at Gold Beach on June 7, 1944. It commanded a price realized of $385,000. Battle flags have long occupied the upper strata of military collectibles; previous Standards at Heritage have garnered very impressive results, including final prices realized of $956,000 and $896,000, respectively, for those belonging to JEB Stuart and George Armstrong Custer, each sold nearly a decade ago.

“This flag, which flew at the vanguard of history’s greatest invasion, is quite simply one of the most important battle flags that exists,” said Dixey. “In its heroic service in leading the liberators of Europe to the beaches of Normandy on D-Day, it represents the truth of all that we wish an American flag to be: freedom, valor and our promise that tyranny cannot prevail.”