Heritage Auctions May 13th Political and Americana auction includes many fascinating and significant artifacts from the earliest days of our country. Some examples are illustrated below. Many of these items will be found in a separate catalog entitled “Washington and the Founding Fathers” which contains the first 111 lots in the auction.  The entire auction is available for viewing and bidding now. I hope you will find something that appeals to you.

Three historically important lots from the dawn of The Nation of Islam will debut at Heritage Auctions this spring: A document archive covering the founding and early decades of the organization (est. $500,000), as well as 20th century political rights activist Elijah Muhammad’s Personally-Owned Kofia Hat (est. $20,000) and his Diamond 14 Gold Star and Crescent Ring (est. $2,000) will cross the block May 11 and May 13.

“This is the first and earliest archive ever offered pertaining to the Nation of Islam,” said Sandra Palomino, Director of Historical Manuscripts at Heritage Auctions. “The goals laid out by W. Fard Muhammad and the hopes expressed by the men and women asking to be accepted into the Nation must be examined within the context of what is happening in Detroit in the 1930s. There are riots in the black community as they struggle to break the constraints of segregation; and into this strife, Muhammad appears and offers them a pathway to improving their circumstances. Within this context, the founding of the Nation is really about the establishment and struggles of a civil rights movement.”

The archive, offered in Heritage Auctions’ May 11 Manuscripts Auction, is consigned by the family of Burnsteen Sharrieff Muhammad, Fard Muhammed’s secretary and a founding member. Included are meeting notes, correspondence from followers, letters, lesson plans, and speech notes. Nothing has been published about the birth of the Nation of Islam (NOI) in the 1930s. Offered here are three linear feet of primary source materials critical to the understanding of the Nation of Islam and its later role in the Civil Rights movement. 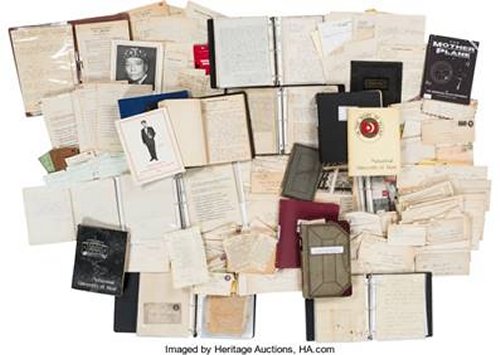 After coming under investigation by state and federal agencies, Fard Muhammad disappeared from the NOI sometime in the mid-1930s. In his absence Elijah Muhammad assumed leadership, but he too would become subject of an FBI investigation. Elijah Muhammad went into hiding during the 1940s and for years, he led the NOI via letters to his wife and brother sending instructions to be implemented by his followers. The archive includes a substantial group of these letters, the only ones to remain in private hands. The majority are said to have been confiscated by the FBI.

Elijah Muhammad led the NOI for four decades. Under his leadership the NOI’s membership skyrocketed in the years after World War II. Despite frequent clashes with Martin Luther King’s doctrine of nonviolent resistance, the NOI played an influential role in the Civil Rights movement. Malcolm X became one of its most important leaders, but was excommunicated in 1964 over disputes with Elijah Muhammad. Two years later, three Nation of Islam members assassinated Malcolm X in Manhattan. Although the Nation of Islam was always a controversial faction within the Civil Rights movement, outcry against them mounted to a fever pitch after Malcolm X’s death.

Elijah Muhammad died in 1975, and his son Emmanuel Muhammad assumed leadership. While the movement has had some success in organizing protests and spreading overseas in the past three decades, it’s power and influence is much less that it was during Elijah Muhammad’s tenure.

Featured in Heritage Auctions’ May 13 Americana & Political Auction is Elijah Muhammad’s iconic and personally-owned Nation of Islam Jeweled Black Velvet Kofia and diamond encrusted gold ring. Consigned by a member of the family, the two items are inexplicably linked to the organization and serve as powerful symbols of the man who led the NOI during its most influential years.

This kofia was probably made in the early 1970’s, and is based on the original kofia designed by Dr. Shakeela Hassan in the early 1950’s. Dr. Hassan, a Pakistani immigrant, was befriended by the Muhammad family when she moved to Chicago to study medicine.  The kofia is consigned directly by the family of Muhammad. It passed to his eldest son Emmanuel Muhammad (1921-1998), then from Emmanuel to his daughter Fatimah Muhammad. In the early 1990’s, Emmanuel and Fatimah put the kofia and his ring in a safe deposit box. The items remained in the safe deposit box until this offering.

Also offered May 13 will be the Elijah Muhammad’s 14-karat Yellow Gold, Diamond and Enamel Ring bearing the Star and Crescent Symbol of the Nation of Islam. The ring, as well as the kofia, descended through Muhammad’s family, and are consigned by his grandson for the benefit of Elijah’s granddaughter (Emannuel’s eldest daughter).