“We were very pleased with the stellar performance of our rare books auctions in 2017,” Heritage Auctions Rare Books Director James Gannon said, “and we attribute much of our success to great ‘fresh-to-market’ collections and Heritage’s unmatched marketing reach and Internet presence.” 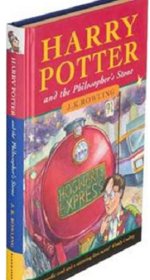 J.K. Rowling’s Harry Potter and the Philosopher’s Stone realized the highest sale price of any book sold by Heritage during 2017. Numerous bidders pushed it all the way to $81,250 – more than quadrupling its pre-auction estimate – and establishing a new world record for unsigned copies. Written in 1996, the book earned Rowling a tiny advance from Bloomsbury, which published just 500 copies in the initial run 20 years ago, with 300 copies earmarked for English libraries.

A T.S. Eliot collection comprised of 40 lots passed down through the Eliot family to T.S. Eliot’s great-niece, the last living relative to have a personal relationship with the author, sold for more than $215,000. The headliner was one of four first-edition presentation copies printed in vellum of Ara Vos Prec, which was inscribed by the author to his mother and realized $57,500.

Another collection that surpassed expectations was The KoKo Collection of Mystery and Detective Literature, encompassing 237 lots, which sold for $475,000 on $299,000 in pre-auction estimates. The top lot in the collection was an attractive copy ofDashiell Hammett’s 1929 Red Harvest, which went for $50,625. Strong prices realized for high spots from Poe, Fleming, Chandler, Doyle and Christie rounded out the consignment.

The highest price for any individual lot in the department was the $206,250 brought in by The Joan Anderson Letter, written by Neal Cassady in 1950 and originally sent to Jack Kerouac. A significant artifact in the history of Beat Literature, the letter proved hugely influential on Kerouac, who called it “the greatest piece of writing I ever saw.” Cassady, in his own right, was a major figure in the Beat Generation of the 1950s and the psychedelic and counter-culture movements of the 1960s. He later admitted that he wrote the 18-page document, with roughly 16,000 words and handwritten additions, deletions and edits, while high on speed. The letter, which described Cassady’s history with women, including women – hence the moniker “The Joan Anderson Letter – and other subjects, was thought to be lost for decades and still never has been published, except for a short fragment which appeared in 1964, after its influence and place in literary lore were already established.

The department had the good fortune to offer another Jack Kerouac item, his Original Typescript of The Dharma Bums, typed from the original scroll, realized $137,500. The 200-page draft Kerouac submitted to his publisher, Viking Press, in January 1958, includes hand-written corrections that made it into the final novel.

“By combining thorough and honest catalog descriptions with visual-minded presentation and exceptional marketing reach, we feel we have found a market-expanding formula at Heritage,” Gannon said. “We have set ourselves on a winning path to even more success in the future and are excited about what 2018 has to bring.”