An extraordinary and rare 1952 Mickey Mantle Topps rookie baseball card being sold on Saturday, Feb. 20, 2016, as part of Heritage Auction Platinum Night Sports Auction, will be on display for members of the New York Media at the Fletcher-Sinclair Mansion (2 E 79th St, at 5th Ave)) in New York on Feb. 19, 2016, from 10 am to 4 pm.

“The 1952 Topps Mantle rookie has become one of the most recognizable pop culture symbols in the world,” said Chris Ivy, Director of Sports Memorabilia at Heritage Auction. “Its profile, and price, has been rising steadily in the last few years. This example, beautifully centered and graded at a Near-Mint 8.0 will bring one collector the ultimate bragging rights.” 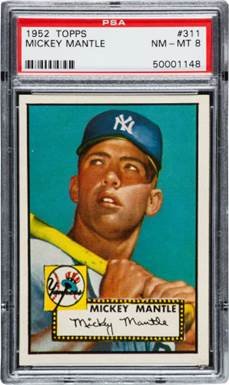 The earliest days of the career of Mickey Mantle are documented in this New York Platinum Night event, beginning with the 1949 contract that the 17-year old slugger signed the day of his high school graduation to legalize scouting by the Yankees.  It’s the first contract Mantle ever signed.  Also on offer is the earliest known payroll check from Mantle’s service to the franchise, and an array of 1952 Topps cards, the most important cardboard of the post-war era.

Also on display will be the extraordinary Andy Leonard Collection, featuring the earliest known professional baseball contract ever made available to the public. The grandson of Andy Leonard – a member of the 1869 Cincinnati Red Stockings ball club, the team widely considered to be the first professional baseball club – has consigned the archive of baseball contracts and other paperwork dating back to the sport’s infancy.

Green Bay Packers legend Jerry Kramer supplies an array of game worn uniforms, contracts and awards, including both his jersey and his Championship ring from Super Bowl I, all of which will be on display.

The family of New York Yankees fan favorite Bobby Murcer has consigned Murcer’s keepsakes of a life’s service to the Majors, with Championship rings, game used gear and much more, while father and son Bill and Dave Christian offer their personal treasures from Olympic Ice Hockey Gold Medal heroics in 1960 and the glorious 1980 “Miracle on Ice,” respectively.

Further highlights on display include:


About Heritage Auctions
Heritage Auctions is the largest auction house founded in the United States and the world’s third largest, with annual sales approaching $900 million, and 950,000+ online bidder members. For more information about Heritage Auctions, and to join and receive access to a complete record of prices realized, with full-color, enlargeable photos of each lot, please visit HA.com.