Long before bidding ended early Sunday morning, this 1952 Topps Mickey Mantle rookie card was already the world’s most valuable sports card sold at auction. Weeks ago, in fact, it raced past the previous highwater mark set by the T206 Honus Wagner that sold for $6.6 million last year.

But at 12:28 a.m. CST Sunday, it became official when Heritage Auctions sold the 1952 Mantle, graded a Mint+ 9.5 by Sportscard Guaranty Corporation, for $12.6 million.

This extraordinary Mantle rookie card is also more than just the most valuable sports card in the world. This Holy Grail of the hobby is also the most valuable sports collectible ever sold at auction. It surpassed the record achieved earlier this year when the jersey worn by Diego Maradona when he scored the so-called “Hand of God” goal in the 1986 World Cup sold for $9.3 million.

“An eight-figure auction result in the sports market was the stuff of fantasy just a decade ago,” says Chris Ivy, Director of Sports Auctions at Heritage. “We always knew this card would shatter records and expectations. But that doesn’t make it any less of a thrill to be part of an auction during which a single item breaks the eight-figure threshold for the first time. It’s an extraordinary accomplishment for our wonderful team of sports experts at Heritage Auctions. And, of course, we could not have done it without our consignor, Anthony Giordano, who put his trust in Heritage to bring this amazing card to market.”

Since Heritage first announced the card’s auction in July, it has been the stuff of international headlines – primarily because Giordano bought the prized Mantle for a then-record-setting price of $50,000 in 1991. Giordano acquired the Mantle from Alan “Mr. Mint” Rosen, then kept it hidden away – ungraded – for the next three decades.

Until the rookie Mantle came to Heritage Auctions earlier this year, its provenance was all that was known about it. The cardboard gem was among the 5,500 1952 Topps cards Rosen bought from a Massachusetts man in the mid-1980s  – “The Famous 1952 Topps Baseball Card Find,” as Professional Sports Authenticator once dubbed it. There were myriad Mantles in the old Topps Chewing Gum cardboard box that had been stashed in an attic for more than three decades, but none nicer than the one Rosen sold to Giordano in 1991. 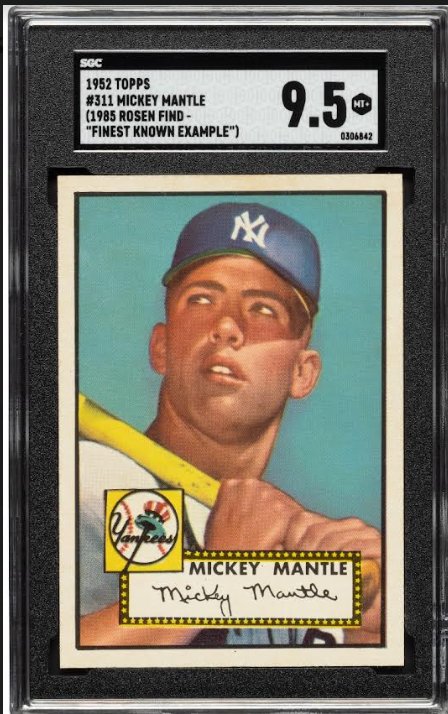 Rosen, in fact, wrote a letter for Giordano that said this 1952 Mantle was “in my estimation the finest known example in the world.” Heritage took the card to SGC, which resulted in the extraordinary grade.

“It bears the finest qualities any 1952 Topps can possess: perfect centering, registration and four sharp corners,” Ivy says. “That this Mantle rookie card remained in this condition for 70 years is a true miracle.”

Another Yankee legend also smashed his way into the record books early Sunday morning when Babe Ruth’s game-used and signed bat, which he used from 1918 through the 1922 season, sold for $1.68 million to become the most expensive game-used bat ever sold at auction. That honor previously belonged to the bat Ruth used to hit the first home run out of Yankee Stadium, which sold in 2004 for $1.265 million.

The Hillerich & Bradsby dates from Ruth’s transitional period – when he went from a very good pitcher and hitter with Boston to the Yankees’ immortal Sultan of Swat. In time Ruth gifted this 44-ounce bat to his Yankees teammate Frank “Home Run” Baker, and later it found its way to a sports collectibles pioneer who was friends with the Hall of Fame third baseman.

Complete results from the Aug. 27-28 Summer Platinum Night Sports Auction will be made available Monday.