A bat beloved by a promising young ballplayer named Lou Gehrig has sold for more than $1 million. Heritage Auctions completed the sale this week.  The war stick, made by Hillerich & Bradsby, is one of the earliest known Gehrig sluggers to hit the market. It was originally available as part of Heritage’s Winter Platinum Night Sports Auction in late February.

At auction the lumber didn’t hit the reserve. But in the following days, an interested buyer emerged who began requesting additional information about the bat – “discussing its significance,” said Chris Ivy, Heritage’s Director of Sports Auctions, “and its history.”

Gehrig used this bat throughout the earliest days of his career – while playing for the Columbia University ball club, the Hartford Senators, then the New York Yankees. His name is stamped on the side in block letters: “GEHRIG.” Such bats were only issued by Hilllerich & Bradsby to athletes who weren’t under contract at the time.

Unlike today’s players, who swap out bats between strikes and balls, the heroes of old often held on to their lumber for years. Gehrig’s bat looked like it had been through wars – the result of what authentication experts call “heavy use.” Yet still clearly visible on the barrel is this side-written note from the factory: 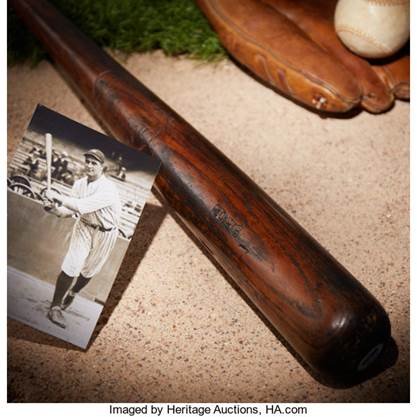 That represents the day that Gehrig returned the bat to the H&B Louisville Slugger factory, allowing thousands more just like it to follow, each one bearing his facsimile signature burnt into the barrel. Nineteen caliper readings taken from the original bat perfectly match the specs of those that followed, suggesting that this million-dollar bat was the one that birthed them all.

The writing on the barrel “means he used this bat, enjoyed it, then sent it back to Hilllerich & Bradsby in order to have future bats made from these specs,” Ivy said. “It was one of Gehrig’s favorite bats and one he likely used over several seasons. I believe that it’s the most significant Gehrig bat in the hobby.”