When the three days were over and the final numbers were tallied, Heritage Auctions’ Spring Sports Collectibles sale brought in more than $12.5 million – 20% percent above pre-auction estimates, an extraordinary achievement no matter the moment. This final number reached near-record totals.

The sale commenced May 7, amid cautious optimism warranted by months of stronger-than-expected sales, and ended May 9 a far greater success than thought likely. Spring’s big win, courtesy titans called The Babe and MJ and Shoeless Joe, only sets expectations that much higher for the summer’s sale, as consignments already begin flooding in for the August Platinum Night event. 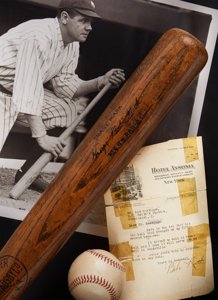 But it wasn’t just the six-figure scores that were worthy of note: One bidder spent $93,000 for game-worn baseball cleats used by Michael Jordan during his brief flirtation with minor-league baseball.

“They were wrong when they said the Titanic was unsinkable, but it appears there’s not an iceberg out there that can bring down the sports collectibles marketplace,” said Chris Ivy, Director of Sports auctions for Heritage. “Clearly a great deal of uncertainty in ‘traditional’ markets has sent a flood of investment capital into the relative safety of collectibles, and we’re so pleased to have been able to deliver such spectacular results for our consignors at a time when good news is a rare commodity.”

The three-day sale began with the trading card highlights, which provided results from significant to astounding across the full range of eras, formats, sets, singles and wax.

The finest Ted Williams Play Ball card from his finest season — the historic .406 campaign of 1941 — smashed the standing record with a $120,000 sale price. Michael Jordan yet again validated his claim as king of the “modern” hobby with a $96,000 sale price for a PSA Gem Mint 10 example of his celebrated 1986 Fleer rookie, almost doubling a previous record set only last month. And a pair of Bowman Chrome Draft Prospect Autograph Superfractors, from Christian Yelich and Francisco Lindor, each sold for more than $100,000, proving the newcomers can indeed play ball with the old-timers.

A baseball signed by Hall of Fame Negro Leaguers and Hall of Famers Josh Gibson and Ray Brown commanded top dollar at $74,400. A ring commemorating the 2018-19 Toronto Raptors NBA Championship season found a new owner at $63,000, a massive price for any ring worn by front-office management and not a player. And an Ichiro Suzuki jersey from his historic 2001 Rookie of the Year campaign sold for $49,200 in a fierce bidding battle waged from both sides of the Pacific Ocean.