The world’s largest collectibles auctioneer flexed its muscles in impressive fashion last week as it shattered two longstanding pricing records en route to a $2.9 million tally. After a marketing blitz that saw the impending sale of University of Texas Longhorns running back Ricky Williams’ 1998 Heisman Trophy promoted by Sports Illustrated, The New York Times and hundreds of other major media outlets, an alumnus of the school claimed victory with the placement of a $504,000 bid for college football’s most coveted hardware.

“This is a price only Heritage could achieve,” said Chris Ivy, Director of Sports Auctions for Heritage. “Our vast marketing efforts can reach potential bidders our competition never could. Many participants for this piece were new to the hobby and had learned of the offering from our national media campaign.”

The second-highest price achieved in the 1,100-lot event likewise shattered the standing world record as an oversized New York Yankees promotional nodder manufactured in the early 1960s claimed a $90,000 result. The sale broke the previous record by $30,000, which was also set by Heritage in March 2015 for $60,000. 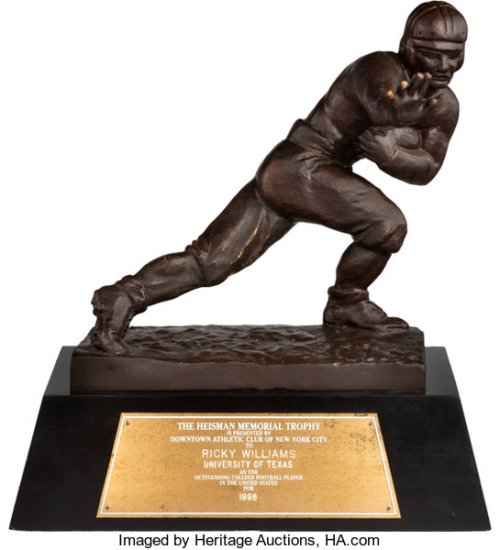