Holy Grails and History-Makers Abound in Heritage Auctions’ Staggering Spring Sports Auction.  Bid in the heritage Auctions Sports Catalog Auction Ending May 6-8, 2021.  There are 2900+ lots on the auction block. Bid, view and register at sports.ha.com. Once-in-a-lifetime opportunities include a Jordan NCAA jersey, a rare Ruth rookie and the world’s most famous chessboard.

It’s impossible to identify just a single centerpiece, or only several handfuls, among the nearly 3,000 lots offered in Heritage Auctions’ May 6-8 Spring Sports Catalog Auction; it’s more than a little tempting to say the whole thing is a highlight. Already, with some three weeks left before the event goes into extended bidding, two baseball cards have well surpassed the million-dollar mark, with a signed Tom Brady rookie rarity close behind. Here, too, is a once-in-a-lifetime offering: Michael Jordan’s game-worn, photo-matched University of North Carolina jersey from his 1982-83 “NCAA Player of the Year” season.

And with a boisterous checkmate comes this extraordinary piece: the very chessboard used – and autographed! – by Bobby Fischer and Boris Spassky during 1972’s World Chess Championship. Worthy of a queen’s ransom, especially in this age of The Queen’s Gambit.

It is not hyperbole to say Holy Grails, headline-grabbers and history-makers abound here.

“I’ll be honest – the breadth and scope of this auction is kind of staggering,” says Chris Ivy, Heritage’s Director of Sports Auctions. “One would think that almost 20 years after our Sports category’s founding, we would run out of ways to be blown away by what we’re able to offers to collectors. But the great joy of this job is that we can still be amazed and astounded with each event.”

In any other auction, this would be highest highlight: the card known as The Card, the 1909 T206 Sweet Caporal Honus Wagner, which to many remains the beginning and the end and the everything-in-between of the card-collecting hobby. This is the card many collectors spend a lifetime pursuing. Look no further than February, when Heritage Auctions sold a Wagner graded SGC Authentic for $2,520,000.

The T206 Sweet Caporal Honus Wagner offered in this auction bears a higher grade of PSA Fair 1.5. And it took only a few days of bidding for this Wagner to exceed the $1.5-million mark – proof, as though it were needed, that collectors still deeply covet this card, knowing there exist but 60-75 T206 Wagners in the wild.

Far scarcer are the studio photos of Wagner taken for the T206 by Carl Horner, the Boston photographer whose studio was something of a hangout for players of the Dead Ball era. One of Horner’s portraits of the Pirates’ Hall of Fame shortstop also appears in this auction, and at just the right time as photos begin to rise in desirability among fans seeking snapshots of immortal moments.

But if there is one man to steal the limelight from Wagner, in this or any other auction, it’s George Herman Ruth.

There are more than three dozen Ruth cards in this auction, most of them rare and coveted. Among that estimable lot, Heritage is thrilled and proud to offer in this May event one of the 35 known blank-back Babe Ruth rookie cards made in 1916 by The Sporting News, this one graded an extraordinary PSA NM 7. The significance of the card itself – the cardboard bow of baseball’s preeminent icon – is not to be underestimated; upon the Mount Rushmore of ball cards, this one sits alongside the T206 Wagner and the 1952 Topps Mantle.

But its condition, too, makes the Ruth a home-run king: There are only three in the world graded just slightly higher than this M101-5, which means the opportunity to own a Ruth rookie in this magnificent condition is not something guaranteed again in this lifetime.

In this event there are so many cards of note, from vintage icons to modern must-haves, it’s difficult to know where to begin. Or how to end.

Certainly high(est) on the list of in-demands is the signed 2000 Playoff Contenders Championship Ticket Tom Brady Rookie, graded BGS NM-MT+ 8.5 Auto 10. Only weeks ago, the card numbered 99/100 set a record when it sold for more than $2.25 million, and that was with an autograph graded at a 9. The one in Heritage’s Spring Sports Catalog event bears the highest-possible graded signature, and is numbered 34 out of 100. 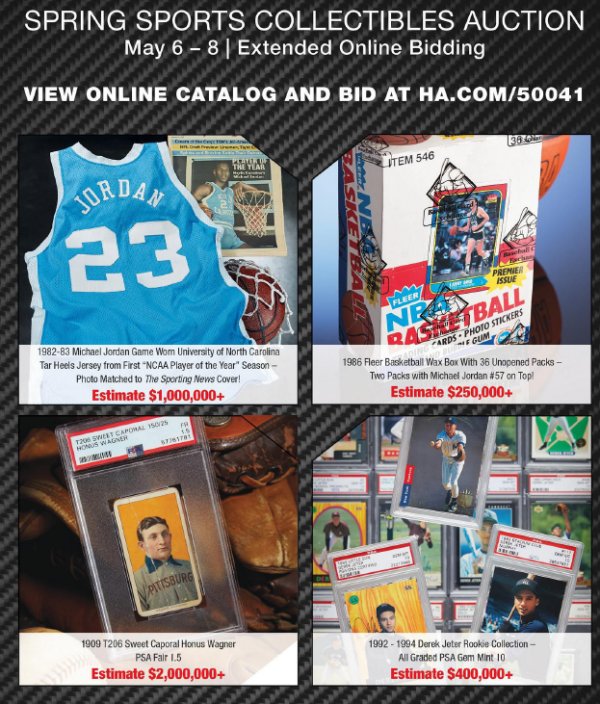 We dare say the card offerings in this event are among the most expansive and eclectic in Heritage’s history, beginning with something almost unfathomable: a 1992-93 Derek Jeter Complete Rookie Card Collection PSA Gem Mint 10, which adds up to 42 cards to which the buyer will add a Front Row Draft Picks uncut sheet and a pack of 1992 Little Sun High School Baseball Prospects.

This auction likewise features something seldom ever seen in the wild: 100 unopened wax packs of Topps’ 1964 Baseball 1-Cent cards, along with the box in which they came. That box isn’t sealed – because, astonishingly, every single pack in there has been graded and slabbed by PSA. Unopened packs of 1964 Topps cards are already nearly impossible to find; in this condition, simply unfathomable.

But such is the nature of this auction, which abounds with things one never expects to see, much less have the chance to own.

That is certainly true of the only known Michael Jordan game-worn University of North Carolina jersey photo-matched to the 1982-83 season. This Carolina blue-and-white No. 23 jersey, in fact, is the very one Jordan sports on the cover of The Sporting News issue that proclaimed him the NCAA Player of the Year. It would be the first of countless accolades to follow that title-winning season, made possible when Jordan hit that jumper with 17 seconds left to secure his Tar Heels the historic win over Georgetown. That was when a nobody named Mike Jordan became Michael Jordan — the very moment, Jordan later told Craig Sager, “that started my career.”

In 2021, this Jordan jersey is arguably the most significant Jordan artifact to reach auction. And it joins myriad other game-worn jerseys of note in this auction, perhaps none more so than a San Francisco Giants top worn by the most famous No. 24 of all: Willie Mays. This one is an especially significant article: The Say Hey Kid wore it in 1958, his first year in the Bay Area after coming of age in New York City.

Another museum-worthy item in this auction is, of course, that World Chess Championship-used chessboard over which Bobby Fischer bested Boris Spassky during the Match of the Century in Reykjavik, Iceland, during the summer of ’72. This is the very board used for the final 15 games of the tournament, after the stone board was replaced by this wooden one for Games 7-21. Both men signed it afterward.

And the board is surrounded by accoutrements and accessories equal to its history, including the table crafted by Icelandic furniture designer Gunnar Magnusson and produced by cabinetmaker Ragnar Haraldsson immediately after the tournament, and used in the World Championships candidate match between Spassky and Vlastimil Hort in Reykjavik in 1977. There is also original contemporary set of Staunton pieces held in reserve but never used for the 1972 tournament, along with an original Garde chess clock identical in design to the original used in Fischer vs. Spassky.

“I’ll be honest: Our team has put together one hell of an auction this spring,” says Ivy. “And being able to bring this material to market is just an absolute pleasure.”