Heritage Auctions’ Platinum Night reconfirmed its status as the hobby’s elite luxury brand this past weekend, posting 20 lots that surpassed $100,000+ as well as a single, staggering seven-figure sum for the Charles Conlon Photographic Archive, which gained steam with a pre-auction New York Times feature article to rocket to a final sale price of $1,792,500.

“Present the most significant material to the hobby’s largest and wealthiest collecting clientele and great things will happen,” explained Chris Ivy, director of Sports Auctions at Heritage. “When it comes to maximizing sale prices for the best of the best, our Platinum Night is in a class by itself.”

Eight of the top 10 prices realized were claimed by rare and high-grade trading cards, a clear indication of the thundering bull market at the top of the population charts. 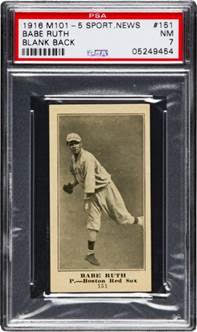 The only Jackie Robinson bat definitively attributed to his heroic 1947 rookie campaign commanded $478,000 after a protracted bidding war, trailing only Kirk Gibson’s 1988 World Series home run model among record tallies for post-war lumber. And the ring issued to Hall of Fame hurler Herb Pennock for his World Championship service to the fabled 1927 New York Yankees found a new owner at $203,150, the highest price ever paid at auction for that elite vintage.

Maurice “Rocket” Richard took top honors for hockey memorabilia in Platinum Night action, bringing $89,625 for his 1947 NHL All-Star sweater, the highest price ever paid for a Richard gamer. And the cap worn by the iconic Babe Ruth in his final Major League game commanded $167,300, a record for a Boston Braves model.