$20 million worth of sports history will be up for grabs when Dallas-based Heritage Auctions conducts its star-studded Summer Platinum Auction which is underway and continues through August 21-22. The event features a treasure-trove of sports memorabilia including a vintage Babe Ruth rookie trading card worth more than $1 million, the finest known baseball signed by Joe DiMaggio and Marilyn Monroe, Magic Johnson’s title-clinching jersey from his rookie season with the Lakers,  another $1 million artifact, and the collection of San Francisco Giants beloved icon Willie McCovey. 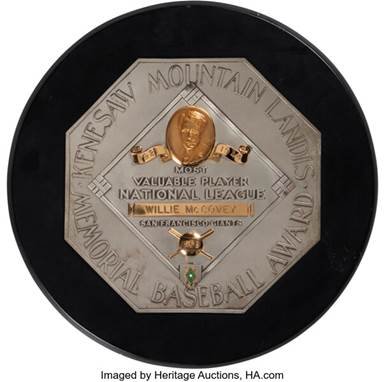 To most, he was the man called Stretch, a nickname acquired in 1955 during New York Giants spring training in Florida. In April 1957, shortly before the first baseman’s Texas League debut as a Dallas Eagle, sportswriter editor Bill Rives explained the moniker: “The other players took one look at his elastic frame and tagged him Stretch.” And so it was until Willie McCovey’s death in October 2018.

Beloved, revered Stretch, the man who, so the joke went, could grab the ball at second base all the way from first.

He was a Pacific Coast League All-Star in 1959; then, the same year, the Topps Rookie of the Year. The National League Home Run Champion in 1963. The Baseball Writers Association of America’s Slugger of the Year in 1968. The National League’s Most Valuable Player in 1969. An inductee into the Baseball Hall of Fame in 1986. A member of Major League Baseball’s All-Century Team in 1999.

For the first time, all of the trophies, rings and plaques that accompanied all those accolades will made available to fans and collectors during Heritage Auctions’ August 21-22 Summer Platinum Night Sports Auction. The Willie McCovey Collection – which features some 210 lots, among them some of the most coveted hardware in baseball history – is the centerpiece of the event. And that is no stretch at all.

“Willie McCovey was, quite simply, one of the greatest to ever play the game,” says Chris Ivy, founder and president of Heritage Auctions’ Sports category. “It is an absolute privilege to work with his family to present his collectibles to fans from around the globe who will cherish them for decades to come.”

McCovey’s widow, Estela, says “it was not easy to part” with these items, among them the Most Valuable Player Award given him by the National League in 1969 and the ring given him upon his induction into the Baseball Hall of Fame in 1986. But, she says, “it’s time these go to people who will really take care of these things – and to those who loved him.”

Willie’s death is still a raw wound for Estela, who still speaks of her late husband in the present tense and often gets emotional when talking about him. She never saw him play ball, outside of videos and tributes. Yes, she says, “he was really a great man,” a legend of the game he loved.

“But he’s a great husband, a great parent,” she says. “And he is my best friend.”

She says McCovey kept everything he ever won or was given – from the 2012 San Francisco Giants World Series championship ring to the first baseman’s glove he used from 1975 until 1980, from the regal “Babe Ruth Crown” he received in 1982 to the battered batting helmet that survived three years taking cuts as a Giant. Here, too, are game-worn jerseys and caps, bats and ball signed by McCovey and his fellow Hall of Famers, even President Obama’s handwritten letter and signed presidential pardon following McCovey’s tax-evasion conviction.

There is no shortage of memories available for fans, from the most major (say, the Baseball Hall of Fame plaque presented him upon his induction) to the most personal (including an oversized framed photo portrait that looks even more majestic in person).

But if a friend asked for something, her husband often gave it away without a second thought; says Estela, Willie was no sentimentalist, just a man who kept things.

“It’s hard for me to part with these things, but the memories are more important to me,” Estela says. “He never threw anything away – even used nails.” She laughs. “It took a while for me to organize everything, but thank God I loved doing it. This is for the fans. They have been so good to me. They write me, tell me stories about him. I know he was very much loved.”

So much so that the San Francisco Giants honored him on myriad occasions, beginning in 1980,  when the team retired his No. 44 to mark his final season. The team also awards players the Willie Mac Award – “a de facto most inspirational player award, coveted by San Francisco players because of McCovey’s history and the fact that the honoree is selected by teammates,” the San Francisco Chronicle noted upon his death on Oct. 31, 2018.

Of course, for the last 21 years the Giants’ ballpark has been perched upon the slice of San Francisco Bay nicknamed McCovey Cove, the moniker bestowed upon the basin just beyond the right-field fence. On the cove’s opposite side stands the McCovey statue – a monument that looks forever in motion, as though No. 44 just bashed another homer out of the park.

And, of course, Estela and Willie were married at the ballpark.

He is as inextricably linked to the franchise as the name Giants itself, because he was one himself. A giant among Giants.

“I would keep everything if I could,” Estela says, choking back tears. “But it’s time to share these things with everyone who loves him as much as I do.”

Heritage Auctions’ enormous booth filled with more than a century’s worth of iconic sports history sits smack in the center of the Donald E. Stephens Convention & Conference Center main lobby, anchoring the 41st National Sports Collectibles Convention in Chicago that officially opens Thursday morning. The timing and placement couldn’t be better, as the Dallas-based auction house just wrapped a history-making $14-million sports-card event that will lead into August’s star-studded Summer Platinum event worth more than $20 million.

“The National Sports Collector’s Convention is the largest annual gathering of sports dealers, auction houses and collectors each year, and Heritage Auctions is proud to be a primary corporate sponsor once again in 2021,” says Chris Ivy, founder and president of Heritage Sports. “We expect this year to be one of the most well-attended and busiest Nationals in the event’s history due to the one-year hiatus, and the fact the industry has seen immense growth since the last National was held in 2019.”

That’s what passersby have already said of Heritage’s booth consisting of dozens of cases filled with hundreds of extraordinary items from the August 21-22 Summer Platinum Night event, among them Babe Ruth’s rookie card worth more than $1 million and Magic Johnson’s signed title-clenching jersey worn during his rookie season with the Los Angeles Lakers, another seven-figure artifact.

The Johnson jersey, in fact, is one of the finest NBA jerseys ever to head to auction, not to mention the floor of a convention center. It’s photo-matched to that championship game, when Magic, en route to the first of his three Finals MVP awards, took center stage – playing every position that night, including center in the absence of an injured Kareem Abdul-Jabbar. Johnson wore the jersey again during the 1984 Finals loss to the Boston Celtics.

This is a monster piece. Here’s how we know: Twenty-four hours after bidding opened, it was already up to $330,000. With more than three weeks to go before the auction.

The only item higher at the moment is the 1916 M101-4 Sporting News Babe Ruth Rookie card, graded PSA EX-MT 6, which shot up to $370,000 within hours of opening. No surprise there: Just last weekend Heritage sold one of the highest-graded 1933 Goudey Ruths for a record-setting $540,000 in the auction house’s Summer Sports Card Catalog sale, more than five times than what a similar card realized just 10 months ago.

The Ruth rookie and Magic jersey are on display at The National, alongside myriad other museum-quality pieces ranging from a 1920 Ruth game-used and signed bat (already up to $280,000 in early bidding) to the 1955 New York Yankees American League Championship Ring presented to Mickey Mantle to items owned and worn by Muhammad Ali never before displayed to the public.

Also on display: the finest-known baseball signed by Marilyn Monroe and Joe DiMaggio, which has already grabbed the attention of the international media.

For the first time, all of the trophies, rings and plaques accrued by Baseball Hall of Famer Willie McCovey will be made available to fans and collectors during the August auction. The Willie McCovey Collection – which features some 210 lots, among them some of the most coveted hardware in baseball history – is a centerpiece of the event, with several of those honors on display in Chicago this week.

And to commemorate the convention’s Chicago return, Heritage has filled the cases with items from iconic items from local legends, among them a pair of Air Jordan 1s worn in 1985 and signed six years later by – who else? – Michael Jordan, who wrote his name on the iconic sneakers on network television just hours before the Bulls claimed their first NBA title. Here, too, in the sale and in Chicago, is a 1969 Chicago Cubs jersey worn by Mr. Cub himself, Ernie Banks; this photo-matched top even comes with a letter of authenticity from Cubs business manager Eldred “Salty” Saltwell.

And from Thanksgiving Day 1929 comes this piece of Chicago sports lore: the football used when Ernie Nevers scored all 40 points in the Chicago Cardinals’ 40-6 shellacking of the crosstown rival Bears. Nevers, the former St. Louis pitcher who surrendered two home runs to Babe Ruth during his record-setting 60-dinger season in 1927, would go on to become a five-time All-Pro and a member of the 1963 charter class of the Pro Football Hall of Fame. This game-used ball is even more significant and magnificent because of the signatures it bears, among them such Hall of Famers as Tim Mara, Red Grange, Walt Kiesling, Benny Friedman, Duke Slater and, of course, Nevers himself.

“We couldn’t be more excited to finally be able to meet with our colleagues, clients and consignors face-to-face once again in Chicago this week,” Ivy says. “And we cannot wait to show everyone what we brought with us.”