What started out as an ordinary day of watching golf turned out to be anything but ordinary for Bob Gustin. The part-owner of a construction company in Wisconsin invited his fiancée (now wife), his sister and brother-in-law to use other three of the four free tickets he had received to the Greater Milwaukee Open in the summer of 1996. The four set up their lawn chairs by the 14th green to watch the tournament that marked the PGA debut of the game’s rising star, Tiger Woods, but otherwise was an utterly ordinary blip on the PGA calendar.

Now universally regarded (along with Jack Nicklaus) as one of the two greatest players all time, Woods announced his arrival as a professional by draining the first hole-in-one of his career in his first tournament. After nervously peering in to the cup to make sure the crowd’s eruption was, in fact, in response to the first ace of his career, a beaming Woods reached in and retrieved the ball.

A throng of fans – including Gustin’s brother-in-law, David Beck – begged Woods to throw the ball their way. Woods’ throw bounced off Beck’s hands and right in to Gustin’s lap.

That 1996 Tiger Woods Hole-in-One Golf Ball, which Gustin got signed by Woods, has remained in his possession for the last 26 years, but will find a new home when it is sold in Heritage Auctions’ Nov. 17-19 Fall Sports Catalog Auction.

The significance of the ball is clear, even to the most casual sports fan. In addition to being arguably the greatest player who ever lived, Woods forever changed the game. He has won 82 PGA tournaments, tying him with Sam Snead for the most in Tour history. His titles in 15 Majors trail only Nicklaus’s 18. His visibility as a golf prodigy, megawatt smile and otherworldly talent – including booming power off the tee – made him an instant superstar.

But in a career that has spanned 26 years and with a résumé that towers over that of virtually every other player ever to tee it up, the ball offered in this auction is one of just three that Woods buried in a single shot. 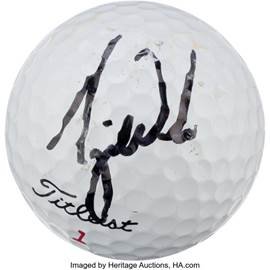 “It’s difficult to equate the significance of this ball to something in another sport,” says Chris Nerat, Sports Consignment Director at Heritage Auctions. “This is more than just someone hitting a home run or scoring a touchdown in his first game, because those things, while exceedingly difficult and impressive, happen far more frequently than a hole-in-one. Then you have to add in the act that Tiger Woods arrived with huge pressure. He had been on TV so much as a kid, and had won so much as an amateur, that everyone who knew anything about golf knew exactly who he was. This wasn’t like a first-round pick who should become a great player. He was tagged as a can’t-miss superstar. Maybe you could compare this to LeBron James, who came out of school with can’t-miss expectations, scoring 50 points in his debut or something like that. But there aren’t many parallels that can be drawn.

“Tiger Woods had to be great … and fortunately for him, he exceeded all expectations,” Nerat said. “What he did at the Milwaukee Open – in his first professional tournament – is something that every golfer, professionals and amateurs alike, strive for … and the vast majority never achieve it in their lives. That he did it in his first tournament was just magical, because it’s not like he crept up on anyone. He was worldwide news – more than any other player in the history of golf – before he played a single round as a pro. So to do something so incredibly difficult, while playing under that kind of scrutiny, is one of those things that is almost so unbelievable it doesn’t make sense.”

Golf Collectibles:Ephemera, 1996 Tiger Woods Hole-in-One Golf Ball from First Professi…Before he ended up with the ball, Gustin knew that day at the course was different.

“You couldn’t get anywhere near him,” he said of Woods. “They had walkways roped off for him, even to walk to the driving range. He was well-protected, because the crowd was huge.”

Gustin was not new to collecting – he had spent years collecting baseball cards, and had amassed “a pretty good collection of 1955 Topps cards, PSA 7” – and knew that when Woods’ ace ricocheted off his brother-in-law and into his possession, he could, with a little luck, make an already-significant memento into an unmatched prize.
“I found a staff member that was able to get the ball to Tom Strong, the tournament director, who was able to get Tiger to sign the ball for me,” Gustin says.

Since then, Gustin has kept the ball “prominently displayed, in a nice glass case with all of the information – the tournament, the date – on a nice gold plaque,” he says.

“It’s obviously a great conversation piece. I was actually in Phoenix on a golf trip (in 1997) when he hit his second hole-in-one. I said he should pay me to follow him around.”

The decision to part with the ring is bittersweet for Gustin, who said he has no intention of enjoying the proceeds by himself.

“Whatever it goes for, I’m splitting that with my brother-in-law, David,” Gustin said. “He’s the one who shouted, ‘Throw it over here!’ He’s the one who it deflected off of before it came to me. We both had a part in me ending up with this ball, so we’ll both enjoy it after it goes to someone else.”

The ball is a Titleist 1 with one of the finest – and certainly earliest – Woods autographs Heritage Auctions experts have seen on a golf ball, even when removing consideration of its extraordinary historical significance. It unquestionably ranks among the finest artifacts of Tiger Woods’ extraordinary career ever made available at public auction, and is accompanied by a notarized LOA from the original recipient.

Images and information about all lots in the Fall Sports Catalog Auction can be found at HA.com/50059.