Heritage Auctions’ two-day Summer Sports Card event, which wrapped late Friday, was, to borrow a phrase, hotter than July.  By the time the final buzzer sounded, 1,971 bidders pushed the auction’s tally past the $9.4 million mark. And it helped lay the groundwork for Heritage’s upcoming Summer Platinum Night Sports Collectibles Catalog Auction, which opened for bidding over the weekend and has already seen considerable action with several weeks to go before the August 29-30 closing.

“Last weekend’s sale checks in as our largest Summer Sports Card event to date,” said Chris Ivy, Heritage Auctions’ Director of Sports Auctions. “And we are very excited to be launching our Summer Platinum Night event on the heels of this amazing result, as the August event includes hundreds of incredibly significant, museum-worthy pieces. The strength of the sports market in the midst of a global pandemic speaks to the stability of the market, with vintage trading cards leading the charge.”

The National Basketball Association’s return to the hardwood just happened to coincide with the first night of Heritage Auctions’ Summer Sports Card event. And right on time, the 1986 -87 Fleer Basketball Cards & Stickers Complete Set – all graded PSA Gem Mint 10 – realized $216,000 Thursday night. No doubt, Michael Jordan’s two cards in that set helped push that set past its pre-auction estimate. All by itself, an unopened box of 1986-87 Fleer Basketball cards, containing 36 unopened packs, sold for $90,000. 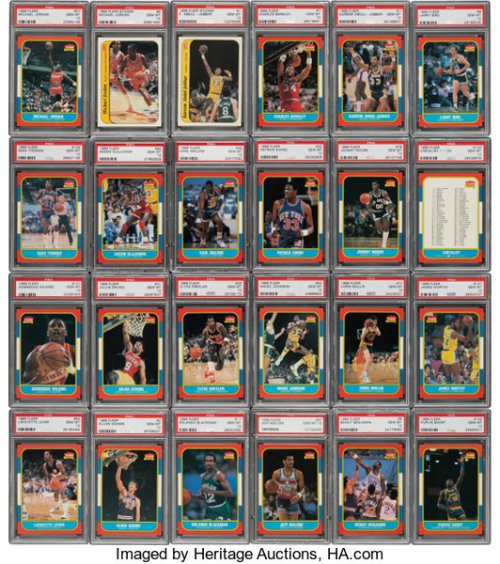 It should come as no surprise, but a Pristine 10 Jordan from that very set – the only gold label example in existence out of thousands submitted for grading – is already past the $82,000 mark in the Summer Platinum Night event. That unicorn will soon have a new home.

Three of the Summer Sports Card event’s biggest hits were offerings from the gorgeous 1933 Sports Kings set, manufactured by the Goudey Gum Company and considered something of a risk at the time since multi-sports sets had long fallen out of favor. This bubblegum-scented set is more or less the wellspring of the modern sports card artistry and industry, and only a handful of cards of the caliber sold over the weekend are known to exist.

Another big score from the Summer Sports Card event was an unopened box of 1979 O-Pee-Chee Hockey cards, which sold for $108,000. No telling how many Wayne Gretzky rookie cards might be in there. Just one of the Great One’s O-Pee-Chee rookie cards – graded PSA Mint 9, with only two higher known to exist – sold for half that, at $54,000.

Not surprisingly, one of the oldest collections in the auction proved one of the most valuable: the T201 Mecca Double Folder baseball cards made in 1911. This collection of 50, which sold for $94,800, holds the very top “Current Finest” spot on the PSA Set Registry, an extraordinary achievement given the fragile paper stock and unique design that gave each card a “flip top” revealing a second player beneath.

Other highlights from the event included, but were not limited to: