LeRoy Neiman artwork is worthy of a position of honor from the Baseball Hall of Fame, to prestigious magazine covers, to the finest of private collections. Since 2012 Heritage Auctions has consistently garnered some of the highest realized prices by any auction house for Neiman original artwork executing eleven of the seventeen Neiman sales in excess of $100,000. That trend should continue with the availability of the 1984 Los Angeles Summer Olympics Original Painting by LeRoy Neiman (est. $100,000+) and the 1974 Arnold Palmer Original Painting by Leroy Neiman (est. $100,000+) which will be offered as part of the Sports Platinum Auction Feb. 25-26 in Dallas, Texas.

Art collectors around the world can search Heritage’s permanent auction archives at ha.com and validate the soaring trajectory of Neiman sales in recent years. Neiman’s ebullient expressionistic style has enjoyed decades of popularity among the general male population since his friend Hugh Hefner gave him his start at Playboy, and he quickly became synonymous with sports art, creating program covers for Heavyweight Championship fights, the Indy 500 and the World Series. A giant amongst American artists, no one captured more significant sports moments or athletes on canvas than the Minnesotan from humble beginnings who wound up immortalizing everyone from movie stars, roulette players, racecar drivers, to professional athletes with his vibrant, expressionistic paintings. 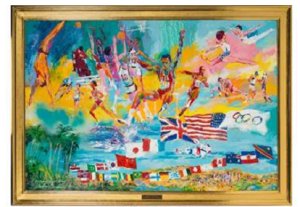 Neiman captured baseball icons such as Babe Ruth and Mickey Mantle, highlighting their historic achievements and also recorded with masterful artistry, the brutality and majesty of heavyweight boxer Muhammad Ali on numerous occasions. His popularity has not waned since his death in 2012 as there is still considerable general interest for original artwork as well as lithographs and serigraphs as staples for “man-caves” across the country.