“Do you know what my favorite part of the game is?” Pro Football Hall of Famer Mike Singletary once asked. “The opportunity to play.” Heritage Auctions feels precisely the same way, which is why the auction house is thrilled to follow December’s $22-million Sports Collectibles auction with a February Platinum Night event that could top its record-shattering predecessor. The Feb. 27-28 Winter Platinum Night Sports Auction is divided into two sessions, each of which will go into extended bidding at 10 p.m. CT. To participate, bidders must place their initial bids before extended bidding begins.

Every Heritage Sports auction is an all-star-studded event. But the Winter Platinum Night Sports Auction, which closes Feb. 27-28, is an especially significant occasion headlined by some of the most coveted memorabilia in sports history – beginning with a T206 Honus Wagner owned by the family of former ballplayer and longtime Today show co-host Joe Garagiola, who long ago traded his final uniform for the card known as The Card. 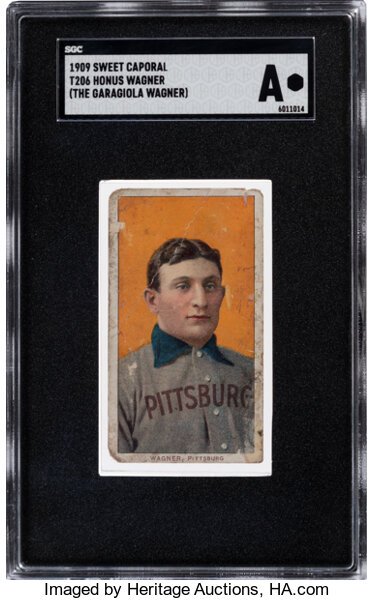 That is but the tip of the top of the mountain of sports history contained in this event.

“Platinum Night continually presents the finest material the hobby has to offer, and this edition is no different,” says Chris Ivy, Director of Sports Auctions at Heritage. “This event covers all the bases, from high-grade rookie cards to game-used material to championship hardware and everything in between. As ever, we look forward to the fireworks as bidders compete to add these treasures to their collections.”

Among those treasures is another extraordinary Wagner keepsake – a game-used bat from the 1912 season and the only photo-matched Wagner bat in existence. That mighty lumber is joined here by some estimable company: Among the almost two dozen game-used bats in this auction, collectors will find a 1926-27 Lou Gehrig-signed game bat, and a 1916-18 Babe Ruth game bat, representing one of his earliest gamers in the hobby.

Ruth and Gehrig are oft-linked throughout this sale, whether by a baseball both men signed in 1934 that was gifted to a priest at Saint Mary’s Industrial School for Boys in Baltimore City, where Ruth learned the game; or the finest known photograph of Ruth and Gehrig signed by both men from the 1927 season.

The man who broke Ruth’s home-run record, the late Hank Aaron, is well represented here, too, most notably by his 1954 Topps rookie card graded PSA Mint 9, one of only 25 to receive such a high mark. From that rookie season comes another extraordinary item: a Milwaukee Braves cap Aaron wore during that first of his 23 spectacular seasons in the sun, which comes from the Milwaukee dry cleaners once tasked with getting the dirt out of ballplayers’ uniforms. And from nearly a decade later comes this remarkable keepsake: a plaque the Braves awarded Aaron upon the occasion of his 300th home run.

Wagner’s card isn’t the only Holy Grail cardboard offered in this event: Here, too, are seven 1952 Topps Mickey Mantles – among them one graded PSA NM-MT 8 and another autographed by The Mick. The auction also includes a 1951 Bowman Mickey Mantle Rookie graded PSA NM-MT 8, alongside the finest known 1949 Bowman Duke Snider rookie card, the only one ever graded PSA Gem Mint 10.

Included in this auction are myriad examples of mint-condition rookies and must-haves spanning several sports and generations, from a 1955 Topps Sandy Koufax deemed SGC Mint 9 to a 1966 Topps Bobby Orr graded BVG Pristine 10 to the 1986 Fleer Michael Jordan graded PSA Gem Mint 10, a card that seems to set a record each time it takes the court. From 1917 comes a Collins-McCarthy Babe Ruth card, from his second season, graded NM-MT 8 – the best-known example, by a long shot, of a card little seen in the wild. From nearly a century later comes the 2013-14 Panini National Treasures Gold Giannis Antetokounmpo Rookie Patch Auto, one of only 25 made, graded BGS NM-MT 8 Auto 10.

History abounds among the more than 1,000 lots featured in this event, among them sweaters, jerseys and shoes worn by up-and-comers on their way to superstardom.

Just weeks after Wayne Gretzky’s rookie card became the first hockey cardboard to shatter the million-dollar mark, Heritage brings to market a photo-matched sweater from the 1979-80 season during which not-yet-The Great One made his debut as an Edmonton Oiler. And here, for the first time, are the star-spangled, game-worn Adidas Kobe Bryant gifted to a high-schooler named LeBron James.

There are complete collections, too, from revered and celebrated footballers, among them the Miami Dolphins’ five-time Pro Bowler and Super Bowl VII Most Valuable Player Jake Scott. Heritage is proud to offer more than three dozen remarkable keepsakes from his championship collection dating back to his days as a University of Georgia standout – from his 1972 Miami Dolphins Super Bowl VII Championship Ring to his 1998 Georgia-Florida Sports Hall of Fame Bust.

But then almost every item in this auction is Hall of Fame-worthy, whether it’s a ticket stub from Jackie Robinson’s debut or Maurice Lucas’ game-worn Spirits of St. Louis rookie uniform from the ABA’s 1974-75 season or the gloves Muhammad Ali wore in 1980 while training for his bout with Larry Holmes – gloves inscribed to none other than Rocky Balboa himself, Sylvester Stallone.