Our Americana & Political Auction #6168 scheduled for December 3rd here in Dallas is in progress. The auction is one of our best and consists of two catalogs. One catalog comprises the stellar 463-lot Scott W. Dolson Collection of Political Americana. The other catalog includes items from scores of other consignors in a variety of categories with a total of 454 lots. The “regular” sale has a wide range of Americana, above and beyond political items. It is an eclectic offering with lots of neat stuff! The total estimated value for both sales is $1.8M, an indication of the quality of the material.

Single-owner Collection of Early Political and Presidential Americana From Washington to Roosevelt could exceed $700,000 at Heritage Auctions

A single-owner collection of historic and rare political and Presidential memorabilia is expected to exceed $700,000 when Heritage Auctions presents the Scott W. Dolson Catalog Dec. 3 in Dallas. The life-long collection consists of over 500 selected items representing virtually every president and presidential candidate from George Washington through Theodore Roosevelt. 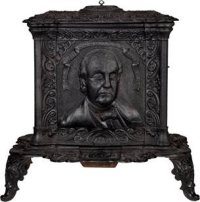 “Scott collected with remarkable sophistication and discipline,” Heritage Director of Americana Auctions Tom Slater said. “He gravitated toward the unusual or exceptional in each category he pursued, with a special emphasis on condition.

The Dolson offerings range from glass and china and snuff boxes to lapel studs and pinback badges. Perhaps the most novel item in the collection is a large cast iron stove with a high-relief portrait of 1848 Democratic presidential hopeful Lewis Cass on the door (opening bid $7,500). It appears that these were not exactly big sellers, as only two or possibly three examples are known, along with a single stove depicting his opponent Zachary Taylor which resides in the Smithsonian’s collection.  “There are so many important, in many cases unique, objects that picking out highlights is all but impossible,” Slater said. “Here are ten stand-out items which illustrate the diversity and quality of the Dolson Collection:”

In addition to the Dec. 3 auction, hundreds of additional Dolson Collection items will appear in an internet-only auction in January 2017.

More than 75 lots from the consigned by the family of Malcolm S. Forbes , including an important representation of rare political buttons from the “golden era” of campaign button designs, 1896 to 1920 will make their auction debut Dec. 3 in Heritage Auctions’ Americana & Political auction.

In the early 1980s Malcolm Forbes decided that a selection of campaign buttons would be an appealing addition to the displays of his renowned collection of autographs and manuscripts – and now the buttons will be available for collectors for the first time in nearly 40 years. 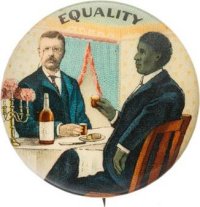 “Of course, Mr. Forbes wanted to collect campaign items of a quality commensurate with other pieces in his collection,” said Tom Slater, Heritage Director of Americana Auctions, “so one of his first acquisitions was an example ofthe key 1920 Cox-Roosevelt pinback jugate (est. $20,000).”

Forbes’ example is considered one of the rarest jugate buttons known to exist. The Forbes Collection Cox-Roosevelt is an example of the St. Louis Button Company design, widely considered to be one of the most attractive of all jugate button designs. It bears photos of both James Cox, Governor of Ohio, and his running mate – a youthful New York politician named Franklin Roosevelt. Bidding will open at $10,000.

In collecting circles the terms “jugate” refers to a button or badge depicting both the presidential candidate and his vice presidential running mate on the same item. Jugates have been produced for every presidential ticket since photographic campaign items came into wide use during Lincoln’s election in 1860, and the series is very popular among political hobbyists.

“Although several different designs were issued, all are extremely rare,” Slater points out, “with perhaps a total of 50 examples known of all varieties. It has been posited that these were all manufacturer’s samples, and that no variety was ever ordered in quantity for actual campaign use.”

Another rare and charming jugate was issued when Teddy Roosevelt famously threw his “hat in the ring” and ran against the establishment candidates for 1912, 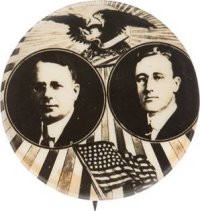 Republican William Howard Taft and Democrat Woodrow Wilson. Early in the campaign Roosevelt was shot and nearly killed in an attempted assassination, but he was soon back on the campaign trail, declaring that he felt “as fit as a bull moose!”  The expression quickly caught the public’s imagination, and to this day his run for the White House is remembered as the “Bull Moose” candidacy.

Numerous campaign novelties reflected that theme, and one of the rarest is the variety from the Forbes Collection, featuring the photos of Roosevelt and his running mate Sen. Hiram Johnson  of California superimposed on the antlers of a moose. Bidding will open at $3,000, however auction prices upwards of $10,000 have been recorded.

Rogue Republican Teddy Roosevelt did not win that election, but he did outpoll Taft, and by splitting the Republican vote allowed Wilson to be elected with just over 40 percent of the popular votes.

One of the most beloved button designs among collectors is the Roosevelt “Equality” button. It was not a campaign issue per se, but rather a novelty issued to celebrate Roosevelt’s invitation to Booker T. Washington to dine at the White House.

This was the first time an African American had done so, and the event was a great subject of popular discussion. Several different pinback buttons were made showing the two men dining together, all of which are highly prized. The Forbes example is the only one in color, the others being in black and white or sepia tones, and is expected to sell in the $5,000 range.

To view high-resolution images of the more than 75 lots form the Malcolm Forbes Collection, visit HA.com/6168.