“Heritage has successfully held Platinum Night auctions in its U.S. coins and sports auctions and we decided the time is right to extend the practice to our comics offerings as well,” said Barry Sandoval, Director of Operations for Comics and Comic Art for Heritage Auctions. “Just 83 lots will comprise our first Platinum Night and we think collectors will relish the selection we’ve assembled for them.” The auction will take place at the Omni Berkshire Hotel, 21 East 52nd Street, with live online bidding and phone bidding also available. 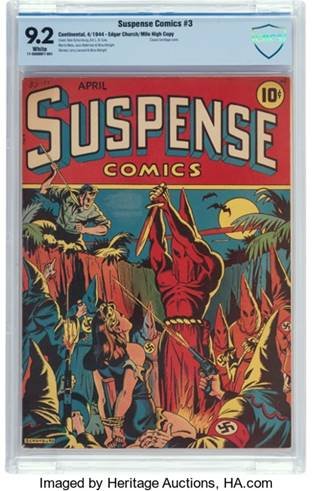 Suspense #3, 9.2 CBCS, a white-hot Golden Age issue, driven by the Nazi bondage/torture cover by Alex Schomburg, could sell for as much as $200,000 in the evening session. High-grade copies of The Avengers #4, 9.8 CGC, is expected to end at $120,000 and a near mint copy of The Avengers #1, 9.4 CGC, is expected to spark spirited bidding and a $100,000 auction price due to its high grade and the first appearance of the Avengers (Thor, Iron Man, Hulk, Ant-Man and Wasp), as well as appearances by Loki, the Teen Brigade and the Fantastic Four.

With her own movie coming this summer, the Amazing Amazon Wonder Woman never has been more popular and a copy of Wonder Woman #1, 7.5 CGC, could sell for as much as $100,000, surpassing price guide expectations. A scarce, high-grade copy of The Amazing Spider-Man #1, 9.2 CGC Massachusetts Pedigree, may bring $90,000 while the first appearance of Iron Man from Tales of Suspense #39, 9.4 CGC Bethlehem Pedigree, also could hammer for $90,000.

Additional Platinum Night highlights include, but are not limited to: