The largest sports collectibles auction of 2016 is now open for bidding at Heritage Auctions, and is expected to command well over $10 million for its nearly 5,000 lots. The sale is anchored by elite examples of the fabled T206 Honus Wagner (est. $800,000+) and 1952 Topps Mickey Mantle rookie (est. $1 million), as well as important player collections from Gary Carter, Monte Irvin, Larry Brown and other sports luminaries.

“We’ve known that this auction was going to be something truly special since The National in August,” said Chris Ivy, Director of Heritage Sports Collectibles. “That’s where we picked up the Wagner and the Mantle, which should alone account for more than $2 million on the ledger.”

Most experts estimate the surviving population of T206 Wagners at 50 or 60, and the offered example is one of the more attractive representations of that rare breed. While the Mantle rookie is considerably more plentiful, the PSA NM-MT+ 8.5 quality assessment places it in the top dozen of all known entries. 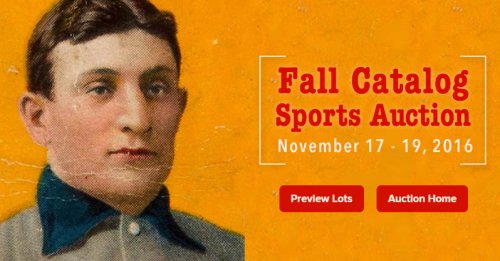 Session Two, Memorabilia, begins with The Gary Carter Collection, more than 400 lots collected over a period of decades by the 2003 Baseball Hall of Fame inductee. Most noteworthy is the baseball that recorded the last out of the 1986 World Series, finalizing an unlikely New York Mets World Championship made possible by Boston Red Sox first baseman Bill Buckner’s notorious fielding error in Game Six. Also on offer will be an array of Carter hardware, including Silver Sluggers and a Gold Glove, as well as game worn uniforms, All-Star Game rings, and autographed material from other sports legends who crossed Carter’s path over the years.

One of the most significant personal collections of Olympic Games memorabilia will tempt elite collectors of that challenging theme, as The Harmer Johnson Collection presents an extraordinary array of medals, badges, torches and more, such as an 1896 Athens Summer Olympics First Place Silver Medal (est. $100,000+) and a 1908 London Summer Olympics Gold First Place Medal Presented to Sybil “Queenie” Newall (est. $20,000+) and what is the oldest item ever sold by Heritage Auctions Sports: A Circa First Century A.D. Roman Bronze Olympic Discus (est. $8,000+).

The top lot of Session 2 recalls a far more cerebral form of competition, however, the chess board upon which Bobby Fischer claimed a key Cold War victory over Russian grandmaster Boris Spassky in the 1972 World Chess Championship, arguably the most famous chess tournament in history.

A wide array of game used uniforms and gear, Championship rings and trophies, programs and tickets and all manner of sports ephemera rounds out the session, closing in Extended Bidding format on Friday, November 18.

The auction concludes in Extended Bidding format on Saturday, November 19, with more modestly valued trading cards and collectibles, again anchored by The Gary Carter Collection. For the entirety of the sale, interested parties are encouraged to bid early and often to afford themselves the widest spectrum of options as each session enters Extended Bidding at the 10 PM (Central) deadline.