With the 2014 season officially underway, gridiron collectors, fans and fantasy owners are unquestionably glued to their televisions to watch all the games, highlights and news focusing on what is now arguably the Nation’s most popular sport. With that excitement, there has emerged a huge group of new football memorabilia collectors, and naturally, with that new collector base football memorabilia prices have continued to soar. Slated to go live on HA.com/sports in mid-October, Heritage Auctions is proud to present, by far, the most significant offering of football memorabilia in our company’s history.

Presenting a huge selection of historically significant game-worn jerseys, Super Bowl tickets, championship trophies, player jewelry and more, we would like to take this opportunity to highlight a small handful of some of the more intriguing modern gamers from the auction. To view our entire November catalog auction preview, please click here. 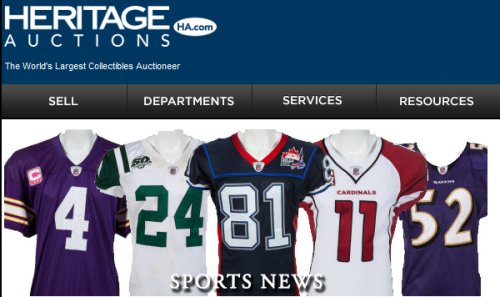