Though the 1934 Tour of Japan, with its cast of legends like Ruth, Gehrig and Foxx, enjoys status as the most famous of foreign baseball tours, the practice of taking to the high seas with the sport’s best was already decades old at that point. Beginning in 1874, Albert Spalding set up the first world tour, when the Boston Red Stockings and Philadelphia Athletics demonstrated America’s Pastime to the English. The popular tradition has continued through the years, and it still represents a significant exhibition in modern day Major League Baseball.  Heritage is proud to present an unprecedented selection of World Baseball Tour memorabilia in our upcoming Platinum Auction (August 27-28).

Ranging from 1888 through the most famous foreign excursion, 1934 Tour of Japan, the collection includes gifts given directly to Babe Ruth by the Japanese government, and documents from catcher/spy Moe Berg. Unquestionably, the most significant single offering from American baseball’s global travels, it also includes a Herb Pennock game-worn jersey from the tour, which represents the only Pennock gamer of any kind in private hands. Also included are souvenirs, autographs, programs and more from the international expansion of our national pastime.

Highlights from the collection include: 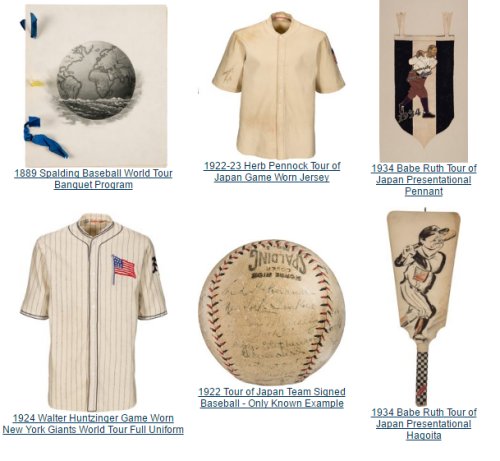