The world’s largest collectibles auctioneer is expected to add more than $10 million to its hobby-topping sales figures August 17-18, when more than 600 elite lots close in extended bidding format on the industry’s most-visited website. Bidding is now open at ha.com.

Heritage will be showcasing the top lots of this sale at the National Sports Collectors Convention in Chicago two weeks before bidding closes, providing its clients an up-close-and-personal look at lots ranging from five to seven figures in value.

Expected to earn the top result in the sale is the only Lou Gehrig jersey photo-matched to multiple games in which he hit a home run, a road grey gamer sported during the Yankees’ World Championship season of 1937. 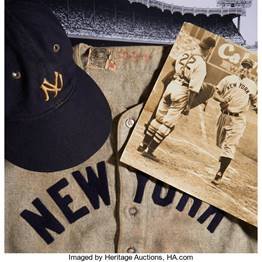 Top-tier lumber from Honus Wagner and Mickey Mantle will tempt high-end bat collectors, while those with a cardboard concentration will compete for a 1916 Famous & Barr Babe Ruth rookie and ultra-high grade examples of the T205 Ty Cobb, the 1933 Goudey Nap Lajoie and the 1939 Play Ball Ted Williams.

“Platinum Night has always featured the best of the best, but this sale should exceed the highest expectations,” said Chris Ivy, Director of Sports Auctions for Heritage. “We could record as many as 20 six- and seven-figure prices in Session 1.”

The Ty Cobb Collection, a thrilling array of personally owned items gifted to an early teammate in the Peach’s hometown of Royston, Georgia, will stand as one of 2019’s most significant “finds,” providing such fresh-to-the-hobby material as Cobb’s personal Carl Horner portrait photograph, the image found on a wide array of early trading cards including the famous T206.

Heritage also will widen its scope with its largest presentation of modern trading cards, including one-of-one inserts from basketball’s greatest names of the past 30 years: Michael Jordan and LeBron James.