In the early morning hours of May 15, 2016, Heritage Auctions became the only auction house to produce an eight-figure sports collectibles auction in 2016 as its May 12-14, 2016 Sports Collectibles Catalog Auction closed, concluding a three-day event that commanded $11 million in total prices realized.

“In less than three months, we have dropped the hammer on over $20 million in sales,” explained Chris Ivy, Director of Sports Collectibles at Heritage.  “It was a quick turnaround after our New York Platinum Night, but clearly the hobby’s largest bidding audience was more than ready to meet the challenge.”

The Trading Card session on Thursday, May 12, 2016 accounted for more than $7 million of the auction total prices realized, upending conventional pricing wisdom across the full spectrum, from the auction’s top lot, a $478,000 result for a PSA Mint 9 example of Willie Mays’ 1952 Topps rookie, to the highest figure ever paid for Frank Robinson’s rookie in the same grade, a staggering $57,360. 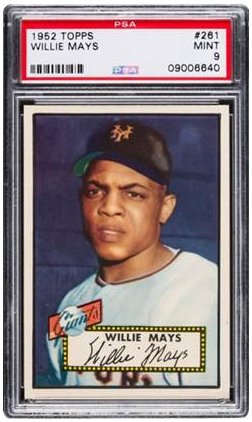 The Friday, May 13, 2016 memorabilia session of the auction was anchored by The Dr. David Fischer “Dream Team” Collection, featuring game used gear and other mementos of the historic 1992 Olympic Basketball Gold Medal squad.  Notable results were $52,580 for Michael Jordan game worn sneakers and $40,630 for a team signed basketball.

Heritage continued to assert its authority of the game worn jersey market as a 1980s Mike Bossy gamer quadrupled its estimate to command a sale price of $35,850, while a rookie-era Pete Rose jersey soared past $50,000 in spirited bidding.

Heritage Auctions is the largest auction house founded in the United States, and the world’s third largest, with annual sales approaching $900 million, and 950,000+ online bidder members. For more information about Heritage Auctions, and to register and receive access to a complete record of our past prices realized, with full-color, enlargeable photos of each lot, please visit HA.com.