The driver that Sam Snead used for 17 years, and which helped him win more than 100 tournaments between 1936 and 1953, will cross the auction block as the undisputed top lot of Heritage Auctions’ Sports Collectibles Golf Catalog auction, Sept. 25-26 in Dallas. It is expected to sell for more than $250,000.

The auction will take place online only, with sessions closing on September 25 & 26 and closing via an extended bid format.

“This is the very driver that Snead used, his most trusted weapon, as he steamrolled his way to the greatest professional tournament record in golf history,” said Mike Gutierrez, Consignment Director for Sports Collectibles at Heritage. “It’s arguably the most significant article of golf memorabilia that exists, the constant, faithful companion of a man whose record of PGA Tour success is unmatched in the history of the sport.”

The club was finally put out to pasture after 17 years of service, following the United States victory in the 1953 Ryder Cup. 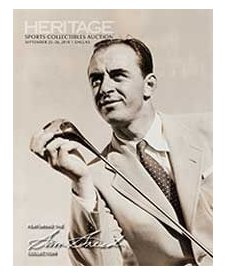 Further treasures from the Snead Collection offered in the auction include the final chance for collectors to acquire one of Snead’s Masters Championship trophies, this one from the 1952 Masters Tournament, which Snead won with an impressive 286 while fending off a furious charge from Jack Burke late on Sunday. Snead’s 1942 PGA Championship Wannamaker Trophy, estimated at $75,000+, won by the golfer at Seaview Country Club in Galloway Township, NJ, also presents the last opportunity to claim one of Snead’s personal PGA Championship trophies. The putter that Snead used to win the 1946 British Open, his first and only victory from The British Open, will also be offered with an estimate of $40,000+.

The Bob Burkett Collection of Early Golf Memorabilia presents a distinct and compelling grouping of memorabilia from one of the top collectors of the subject in the hobby. Burkett, a 25-30 year veteran collector of golf memorabilia, started collecting at decades ago, with the infancy of the game itself as his focus.

The gem of the offerings from Burkett has be the 1916 Cherokee Country Club Invitational Tournament Trophy Won by Bobby Jones, the only Jones trophy in private hand and the earliest Jones trophy to ever cross the block, estimated at $100,000+.

“Bobby Jones was just 14 years old and a virtual unknown when he won this tournament in dominant fashion,” said Gutierrez. “By the end of the next 14 years he would have won Golf’s Grand Slam and assured himself a place as the most revered golfer of all time. It all started with this trophy, making this one of the greatest Jones-related artifacts that there is.”

Heritage Auctions is the largest auction house founded in the United States and the world’s third largest, with annual sales of more than $900 million, and 850,000+ online bidder members. For more information about Heritage Auctions, and to join and receive access to a complete record of prices realized, with full-color, enlargeable photos of each lot, please visit HA.com.