There is less than one week remaining before our March 20th consignment deadline, so please contact us immediately to assure placement. Early consignments of elite items will be eligible for national advertising and press campaigns. 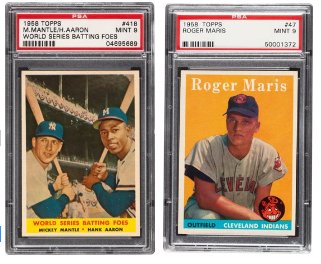 The Topps Company redefined the trading card collecting hobby in the 1950’s, and two of its most celebrated baseball sets from that first decade will tempt the most condition-conscious hobbyists in a newly-announced Heritage Sports auction closing March 23rd. The 1955 and 1958 Topps sets, rated number two and number four respectively on the PSA Set Registry, will be sold as individual single-card lots in the Extended Bidding format sale on March 23.

“It’s a lot of hard work to build a top five set,” said Chris Ivy, Director of Heritage Sports Collectibles. “But the joy is in the journey. This auction stays true to that principle.”

While set-builders are certain to play a leading role in the bidding competition, important rookie cards and Hall of Fame condition rarities will surely draw attention from those collectors interested only in elite singles. Debut cards from Sandy Koufax, Roberto Clemente, Harmon Killebrew and Roger Maris are among the finest available, as is the famed 1958 Pancho Herrera error card.

The ninth playing of the PGA Championship was headquartered at Long Island’s Salisbury Golf Club, just a few miles from the towns that served as the fictional inspiration for West Egg and East Egg in F. Scott Fitzgerald’s masterpiece, “The Great Gatsby,” published just a year earlier. It was a fitting battleground for the ultimate victor, a man nearly as emblematic of the debaucherous Roaring Twenties as Babe Ruth himself. Walter Hagen was unquestionably golf’s foremost celebrity playboy, and this match play battle for supremacy found him firmly in his prime. 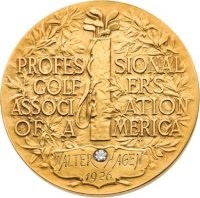 Hagen would defeat two fellow future Hall of Famers in the semifinals and finals, Johnny Farrell and Leo Diegel, clinching the Championship four-and-three to secure the third link in an unbroken chain of four victories in the tournament between 1924 and 1927. Hagen remains to this day the only golfer to win more than two PGA Championships in a row. It would prove to be the eighth of eleven career major championships.

Heritage Auctions is proud to present the very medal that he was awarded for that peerless feat, and it will be showcased in our upcoming May 11-13 Sports Collectibles Catalog Auction.