There is nothing more exciting in the sports collectibles industry than a new find that comes to auction for the first time. In the upcoming Goldin Auctions October Legends Auction, collectors will have this opportunity to bid for the first time on a 1916 Sporting News M101-4 Complete Set of 200 cards that was uncovered in the Midwest. The auction, at www.GoldinAuctions.com runs from October 6 through November 1, 2014.

“We are proud to offer this set that has remained in the original owner’s family for nearly 100 years,” says Ken Goldin, Founder of Goldin Auctions. “This is only the second completely PSA graded M101-4 Sporting News set ever sold at auction and a world-class set of one of the most important and rarely offered of all pre-war baseball card sets. We will not be surprised if this set sells in the mid six-figures and sets a new record for such an item.”

The complete set of 1916 M101-4 Sporting News cards, is one the finest sets the hobby has ever seen and is the #2 graded on the current PSA registry and PSA’s #4 All-Time Finest Set. All 200 cards have been encapsulated and graded by PSA, except for one card #11 Jack Barry, which was graded ‘authentic’ due to a unique printing error on the back of the card that reverses the image of the front of the card on the back.

Created by Chicago based photographer and printer Felix Mendelsohn, the cards are one of the most significant pre-war card sets due to its tremendous photography, solid lineup of existing stars and two of the most highly regarded singles – the Babe Ruth rookie card and the very scarce Joe Jackson card, one of the handful of different regular issue Jackson cards. The set is commonly referred to as “The Sporting News set”, but was actually issued by more than a dozen companies with advertising for 18 regional issuers as well as with blank banks. They were extensively advertised in and sold through The Sporting News publication. 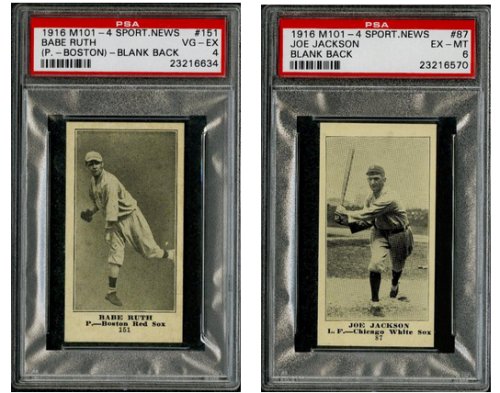 The consignor’s grandfather was a stamp collector as a boy, and also owned a tobacco and candy business during the 1960s and 70s. When her parents passed away, she went through their belongings, and came across her grandfather’s stamp collection. However, within that collection of stamps was a uniquely ornate tin box, which housed these cards – a complete set of 200 different Sporting News M101-4s. The consigner believes her grandfather would have collected the cards as a teenager when they were first issued.

For more information and to view and bid on the hundreds of collectibles in the October Legends Auction including the first and last contract Babe Ruth ever signed with the Yankees, visit the auction preview www.goldinauctions.com.