Collectors might want to grab another log for the fire when they head for an easy chair to digest the 2016-17 Memory Lane Winter Rarities Auction. The catalog for the annual event, running December 23 through January 14, is a company record 256 pages long with over 1,300 lots of vintage and rare sports cards and memorabilia.

The auction kicks off with one of the hobby’s rarest and most sought after gum cards; the 1933 Goudey Nap Lajoie (PSA 6). Left out of the set originally distributed via wax packs, the Lajoie cards were only acquired by 1930s era set collectors who wrote the company, asking why they couldn’t find card #106. PSA has examined 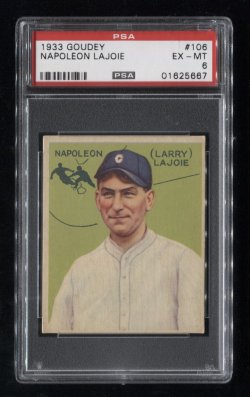 only 84 copies of the card over the past 25 years and higher grade examples are rare.

Also among the premier items in the sale is a 1925 Lou Gehrig Exhibit rookie card graded PSA 3. There are fewer than 50 of this fast-rising postcard-sized antique on the combined grading company population reports.

In addition to the Gehrig, there are numerous important pre-War cards up for grabs including a 1933 Goudey #181 Babe Ruth and a ’33 Goudey Sport Kings Ruth, each graded PSA 8, a 1932 U.S. Caramel Gehrig also graded 8, NM/MT graded examples of two different 1934 Goudey Gehrig cards, a T204 Ramly Walter Johnson rookie card rated PSA 5 and the top-rated 1910-1912 Sweet Caporal Pin set on PSA’s Set Registry. Boasting a GPA of over 7.8, the set includes all 208 subjects. 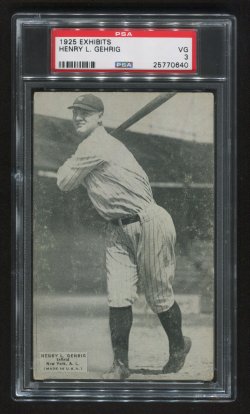 T206 collectors will find a large group of listings featuring rare back variations while fans of the Turkey Red (T3) set will see deadball era stars aplenty.
The auction includes enough high-end vintage cards of Mickey Mantle, Hank Aaron and Roger Maris that special sections of the catalog have been created for each.
The scorching market for early Mantle gets another chance to show its mettle with Memory Lane’s offering of a near mint, graded example of his iconic 1952 Topps card as well as PSA 8 1953 Topps and Bowman and a 1957 Topps rated PSA 9.

There’s another 1952 Topps Mantle in the auction, this one signed and carrying an autograph grade of 9 as well as a 1953 Topps Mantle, also with a 10 rating on the signature.

The “61 in 61” Roger Maris collection of high-grade cards gets its own spotlight. The only Maris Master Set with all 114 cards, the collection includes numerous scarce cards issued of the popular slugger along with a PSA 9 rookie card.

There are dozens of rarely offered Aaron cards, such as regionals and food issues along with multiple copies of his 1954 Topps rookie cards highlighted by a PSA 8. 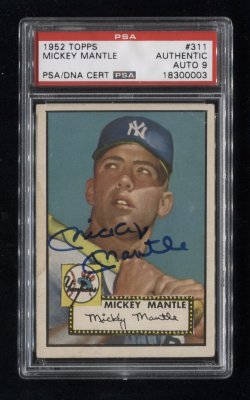 A huge number of vintage and modern-era graded complete sports and non-sports sets, lots and singles both graded and ungraded will be up for bid. Dozens of graded singles from the 1930s, 40s and 50s have been consigned as well as a large assortment of vintage unopened boxes and packs that are rarely seen at auction.
Collectors of high-grade football, basketball and hockey rookie cards from the modern era will see a 1957-58 Topps Bill Russell rookie card graded 8, PSA 9 examples of the 1961-62 Fleer Russell and Jerry West (rookie), a PSA 10 19 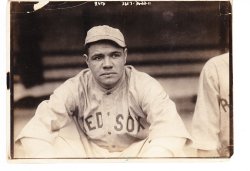 A Memory Lane sale usually includes at least a few fully authenticated Babe Ruth items and the Winter Rarities event is no exception. There are also a couple of Type I Ruth photos—a 1915 George Grantham Bain image of the young Red Sox slugger and an action photo from the 1927 World Series.