Kids who found them inside packs they opened decades ago were excited. In 2017, the enthusiasm for the biggest names in baseball history hasn’t waned a bit and some pack-fresh classic cardboard is about to go on the auction block.  Memory Lane’s upcoming Spring Auction includes some single cards that are expected to attract six-figure bids, a group of original wax packs rarely offered for sale and over 1,200 other lots that span the history of sports. 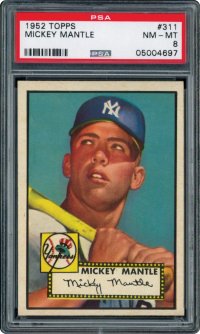 PSA 8 examples of the 1951 Bowman rookie cards of Mantle and Willie Mays and the 1953 Topps Mantle headline a huge grouping of post-War Hall of Famers being offered.
Entering the hobby market for the first time is a baseball signed 72 years ago by Babe Ruth during a visit to Comiskey Park. The consignor’s father snared Ruth’s signature on a new baseball as a nine-year-old that day. The ball was placed in a brown paper bag and stored inside a safety deposit box for decades. It includes a full letter of authenticity from PSA/DNA.

Ruth is also the subject of several Type 1 photos being offered in the auction including one from the 1927 World Series. He appears on a few of the photos with Lou Gehrig, who also has a prominent place in the photo section. Memory Lane is offering a classic 8×10 image of Gehrig that was used for his 1933 Delong baseball card and also for newspaper coverage of his four homer game in June of 1932. Original photos of Walter Johnson, Jimmie Foxx (autographed) and Roy Campanella will also be up for bids.

The ten NCAA basketball titles won by UCLA coach John Wooden tell only part of the great story that belongs to one of the most beloved sports figures of all-time. The auction features a signed coaching sweater gifted many years ago to a female friend of the coach’s grandson. The “UCLA Staff” sweater comes a letter from the consignor as well as a testimonial video. The minimum bid is $10,000.

Memory Lane will be offering a remarkable run of 1948 Bowman baseball cards including PSA 10 examples of the Stan Musial and Yogi Berra rookie cards and they’ll also be breaking up the second best 1948 Bowman basketball set on PSA’s Registry, headlined by George Mikan’s rookie card.

T206 collectors will have plenty of opportunities to land something from their want list. Those who collect rare backs will find cards of several Hall of Famers including Ty Cobb (Uzit), Walter Johnson (Hindu) and Christy Mathewson (Carolina Brights). Pre-War enthusiasts will also see a PSA 8 Willard’s Chocolates Ruth and a large selection of Goudey cards in the catalog. 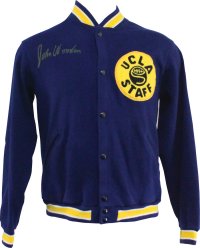 The mystery and scarcity of vintage unopened packs continues to attract attention and Memory Lane will offer one of the greatest groupings to come to auction in a long time. The William Toppi Wax Pack Collection includes dozens of vintage packs from every sport including a PSA 8 example of the ‘holy grail’ 1952 Topps baseball pack, 1953 Bowman Color, 1953 and 1954 Topps, 1948 Bowman basketball and even a 1937 OPC hockey pack. Each will be sold separately. The auction also includes a group of 14 unopened 1960 Topps baseball packs offered as one lot.

Long before he was known around the world, Muhammad Ali appeared on a 1960 Hemmet’s Journal trading card, the earliest known issue from his long boxing career. Today, examples are scarce but Memory Lane has a PSA 8 rated specimen of this “Cassius Clay rookie card” in the Spring Auction. It’s one of only six at that plateau ( only two higher). Bidding starts at $2,000.

The auction will open April 22 and bidding will continue through May 6.  The company’s T206 Set Break Auction will be conducted concurrently, presented in its own catalog. To receive a catalog or register to bid, visit Memory Lane’s website or call 877-606-LANE (5263).